I Believe in Voting

I don't believe in political parties. I tend to vote to one side of the center line most of the time, but I don't agree with this particular party on every issue. I wish Americans had more than two competitive party choices, because on most days I - and many people I know - struggle to fully support either one.

I also don't believe in how politics in our country are structured. Thousands of hours and millions of dollars are spent trying to convince Americans that one way is better than another way and that one candidate is better than another candidate. Can you imagine how different our country would look if these hours and dollars were spent on actually solving our country's biggest problems - poverty, homelessness, hunger, job loss, health care, inequality - rather than on arguing about who should be in charge of the process of fixing them?

I do, however, believe in voting.

11 years ago, a candidate for the 11th District of the Washtenaw County Board of Commissioners caught me sitting on my front porch and started talking to me about his platform. I liked what he stood for, so I voted for him on election day. He won...by ONE vote.

My vote counts. Your vote counts. Make sure that when the polls close this evening, your voice was heard.
Today, tomorrow, and the next day will be horrible days for some and wonderful days for others. RESPECT THAT. BE KIND. If your candidate lost, respect and be kind to those who believe they made the right choice for our country. If your candidate won, respect and be kind to those who believe our country would have been better off with someone else in the White House.
I'll be honest - typing the paragraph above was tough. I have a stronger opinion and more intense feelings about this election than I've had about any other election in my lifetime, and if my candidate loses, following through on my own words will be even tougher. I promise to try, though, which is why I'm documenting that promise publicly.

Additionally, remember that this election is not our only opportunity to vote. To have a voice. To affect change in our communities and, on a larger scale, make our country a safer, healthier, kinder, and gentler place in which to live.

Four years ago I wrote about and then acted on my decision to - in the days after the election - redirect my emotions and voice toward productivity. I backed away from the social media battlefield and stepped out into the real world to perform a handful of good deeds and acts of kindness. I plan to do the same thing tomorrow (or the day after, or the day after that, if I can't get it together immediately following the election), and I encourage you to join me. Buy a cup of coffee for the person behind you in line. Feed a stranger's parking meter. Send a handwritten note to a friend. Pick up trash at your neighborhood park. Make a meal for a friend going through a hard time. Lift someone up.
I voted early this year, almost three full weeks ago, and as I walked away from the polling place I was surprised to feel tears stinging my eyes. A handful of my tears stemmed from the relief that came when the "weight" of voting had been lifted off of my shoulders. The rest of my tears were for all those whose health, safety, livelihoods, and lives depend on our votes. 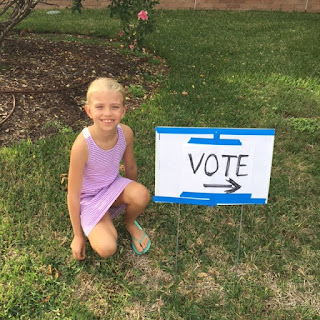 VOTE.
Posted by Chasing Roots at 5:00 AM