A few days ago, a package arrived from my parents. This isn't an unusual occurrence (my mom regularly sends us masks, and she periodically sends the kids the Sunday comics from their newspaper), however it's always appreciated, as receiving and opening "fun" mail always lifts everyone's spirits.

This particular package contained - as expected - masks, as well as a postcard with a picture of Disney's EPCOT Center on the front. I assumed the postcard came from our trip to Disney World last January; I thought perhaps my mom had purchased it as a souvenir and then decided she no longer wanted it and sent it to me. 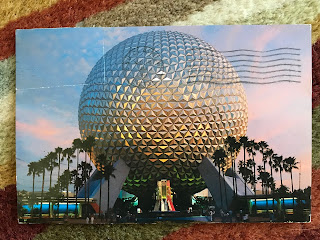 When I flipped the postcard over, I discovered that no, it wasn't a souvenir from our recent trip to Disney World; it had been written on, addressed, and mailed...to Erin Mueller. I haven't gone by Erin Mueller in 17 years, so I checked the signature.

I was just five years old when this postcard arrived in the mail for me, and as I read through what my grandparents had written, I could see how perfectly it was crafted - all capital letters and simple words - for a five-year-old who would have been learning to read. 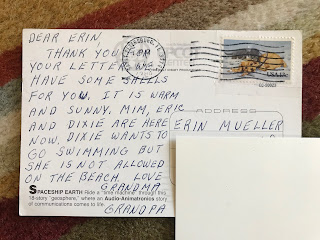 DEAR ERIN,
THANK YOU FOR YOUR LETTER. WE HAVE SOME SHELLS FOR YOU. IT IS WARM AND SUNNY. MIM, ERIC, AND DIXIE ARE HERE NOW. DIXIE WANTS TO GO SWIMMING BUT SHE IS NOT ALLOWED ON THE BEACH.
LOVE, GRANDMA AND GRANDPA

I don't have many pictures of me with my grandparents. My parents took photos, but smart phones and their ability to capture important relationships were still decades away. We visited my grandparents a few times a year, but they lived three hours away which meant they couldn't pop by for Sunday night dinner or to see a Saturday morning soccer game. All things considered, I knew my grandparents well as a little girl because my parents (and my grandparents) made an effort to help my sister and me development relationships with them. But I didn't know them well as an adult - as I mentioned above, my grandpa died when I was still young, and my grandma suffered from Alzheimer's Disease for many years before she passed away when I was in my early 20's - and I wish that weren't the case. 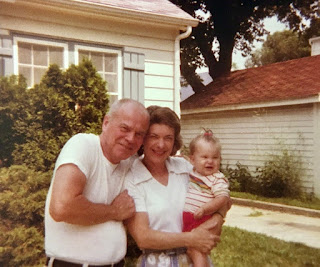 This postcard is a reminder of the effort they made to stay connected...a reminder of how much they loved me, my sister, and all of their grandchildren.
My parents and Tom's parents all send postcards and notes to my kids now. I know Will and Hallie don't understand the importance of those communications now, but they will someday.
Also, the stamp on the postcard cost $0.13. 😉
Posted by Chasing Roots at 5:00 AM