Reading
I don't know how this is possible, but I didn't finish any books in April. I should have had more time to read, right? Not less? Anyway, I read quite a bit, but I'm only about halfway through the two books on my nightstand: Someone Knows Something and The Diary of Anne Frank (which I'm reading aloud to the kids). I'll report in on both next month, and hopefully I'll have had time to crack open something new as well!

Watching
Like everyone else in the United States, Tom and I are watching Tiger King: Murder, Mayhem, and Madness on Netflix. I honestly don't know how to best describe this series; I expect that just about anything I write will sound - at least to someone who has never watched the show themselves - completely ridiculous and borderline unbelievable.

In a sentence: this true crime docuseries centers around big cat owner and enthusiast Joe Exotic, a "gay, gun-toting cowboy with a mullet" (as he describes himself) as he feuds with Carole Baskin, the founder and CEO of Big Cat Rescue.

The People: you can't possibly find a true story about polygamy, drug use, cult-like operations, harassment, exploitation, mysterious disappearances, AND murder for hire.

On a lighter note, Hallie and I are working our way through all the oldie but goodie movies I loved as a tween and teenager. Here's our ever-growing list, with those we've watched already written in red. Anything we're missing?

I know I need to save some of these movies for when Hallie is a bit older, but I've added them to the list now so I won't forget to watch them with her someday. On a related note, some of the movies we've already watched are borderline inappropriate for kids her age and maturity level, but I always look the movies up ahead of time and try to figure out if/when I'll need to do some strategic fast forwarding. (I also try to record the movies on television, because those versions are usually a little "cleaner" than the original versions.)

Listening To
If you have Instagram and check Instastories even just occasionally, and if you are AT ALL a fan of Broadway, do yourself a favor and start following Jessica Vosk. She lives in NYC, so that piece of her life has been interesting to follow, and is funny and fun and real. She's also an AMAZING vocalist, and regularly sings her way through her stories, which for a musical theater fan like me is a wonderful treat. 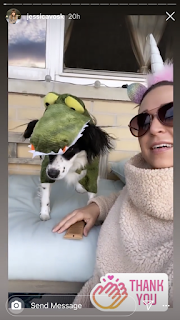 This recommendation might fall more accurately into "watching", but as Jessica's singing is one of my favorite aspects of her stories, I thought I could file her here instead.

Wearing
Anyone else tired of their Corona Wardrobe? I'm still on a jeans, t-shirt, and flip flops kick, but I miss my cute tops and shoes with heels. I realize I could wear the cute tops and shoes with heels around the house, but that just seems silly. To make myself feel better, I bought another quarantine t-shirt...which hasn't arrived yet. My first one - "EVERYTHING IS FINE" - came from Saturday Morning Pancakes, a company with which I've been happy both times I've ordered. My new shirt came from Adybelle, and I'll weigh in on the company's service and their shirt quality next month. (I can't say I'm all that impressed with the shipping turnaround, but I'm trying to cut them some slack given the current state of affairs.)

Hallie and I are also loving our new Noonday scrunchies - they do a great job of dressing up our messy buns! 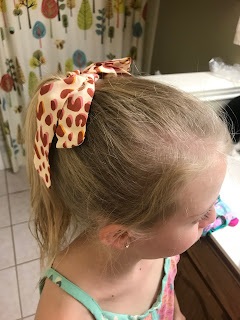 Trying/Using
My 2020-2021Simplified Planner by Emily Ley arrived, and I absolutely adore it. Pre-Covid-19 I would have immediately started filling the pages with summer camps, travel plans, and school holidays, but now, in the midst of Covid-19, adding anything to the calendar feels too risky. I did, however, write in my family members' and friends' birthdays! 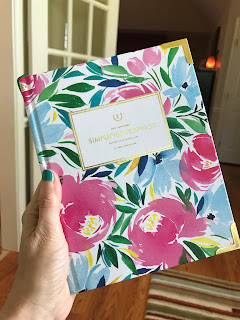 Eating/Drinking
New and/or complicated recipes are tough to tackle right now. Curbside grocery pick-up slots can be hard to come by, which means we're booking them - and choosing what groceries we want - far in advance. We also don't know if we'll actually get everything on our lists, which means we might not end up having all of the ingredients a specific recipes requires. I find myself cooking a lot of meals built around staples, and at least a couple of times a week we make family favorites - spaghetti, tacos, sloppy joes, beans and rice, breakfast for dinner - because they're comforting. We did, however, try a few new recipes that are worth sharing! 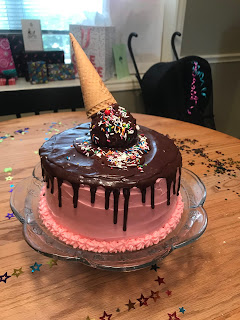 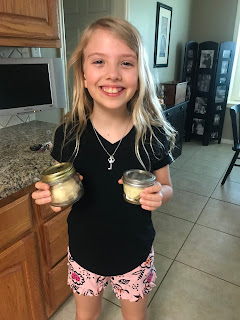 We made it through April, friends. I hope and pray that with the arrival of May comes stability, comfort, health, happiness, and peace for you and yours.
Posted by Chasing Roots at 5:00 AM