I've been helping Tom get dressed since we started dating more than 18 years ago. He's good at a lot of things...matching colors, putting outfits together, and determining what style/level of attire to wear in a specific situation are not included in this category.

My job was the hardest back when Tom first started working as an Assistant Professor at TAMU. He'd never needed to dress formally (at least not regularly) so he had no idea how to match a shirt with a tie, pants with socks, or a belt with shoes, nor did he know how to pull an entire outfit together with a coordinating jacket. I lost track of how many times he came out of the bedroom dressed, only to have me send him back to the closet to change. More than once Hallie - who was between two and four at the time - sent him back to change, as even she could see that the colors and/or styles he'd chosen didn't work together.

At this point Tom has been - and has therefore dressed like - a professor for about nine years, and in that time his clothing-related skills have improved dramatically. I still pick out all of his outfits for conferences, and on occasion Hallie or I still send him back to the closet (or worse, I tell him at the end of the day - after not seeing him before he left for work - that he can't wear a particular outfit again), but for the most, he finally has it mostly figured out.

Tom walked in the door after a long day at work and the first thing out of my mouth was, "what's wrong with your shirt?" Not the most sensitive greeting, I know. But I couldn't help notice that his shirt did not fit correctly.

Tom explained that as he was preparing to speak about engineering to a large group of TAMU students, his department offered him a new TAMU engineering polo shirt. He requested a size large, they pulled the shirt from the box, and he threw it on before heading to - and apparently "crushing" (his words) - his presentation.

I told Tom I was thrilled he'd "crushed" his presentation, but that there was no way the shirt he had on was a large, given how tightly it clung to his torso and shoulders and that it barely reached the top of his belt in length. I then wondered aloud if perhaps the reason the students had enjoyed his presentation so much was because he had showed off his broad shoulders and washboard abs...

Tom assured me he had on a size large shirt, but I still didn't believe him and insisted on checking the tag. When I did so, I discovered that the shirt was a large alright...a ladies large. 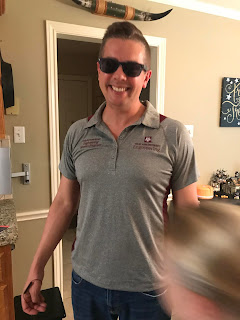 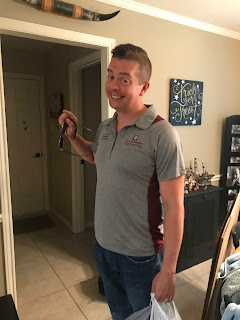 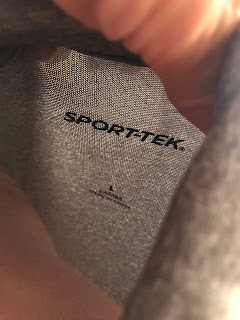 And this, my friends, is why he married me: so he won't show up at work in a ladies polo shirt. At least not for the second time.
Posted by Chasing Roots at 5:00 AM