I grew up in an ethnically and religiously diverse community. Because of the plethora of religions supported, holidays celebrated, and traditions followed (and not supported, celebrated, and followed, for that matter - the Freedom From Religion Foundation began and is still based there), and because my hometown has earned a reputation as "the land of the perpetually offended", very little related to religious holidays could be found in public buildings and schools throughout my childhood years. We never sang Christmas carols or wore Santa hats in school, and in 1987, the Christmas tree that had stood proudly in the State Capitol rotunda every December since 1918 was renamed a Holiday tree in an attempt to make the building feel more inclusive and avoid irritating those who didn't celebrate Christmas.

In 2011, Governor Walker re-renamed the tree, this time back to a Christmas tree. "It's a diverse state", Walker explained. "I think it's a reflection of the many wonderful traditions in the State of Wisconsin." Now, during the month of December, the Capitol rotunda also hosts a Menorah, Festivus trees, and a nativity scene mocking Christmas, so it seems more people are "represented" in their State Capitol building.

Again to clarify, I understand why the tree was re-renamed. Just changing the name of an object long associated with a religious holiday doesn't necessarily lessen the association between the two. It's not the point of my post either though, so I'm moving on again.

I now live in a completely different kind of community from the one in which I grew up, so out of curiosity, a few years ago I ran little (uncontrolled) experiment. While shopping and running errands during the two weeks leading up to Christmas, I recorded what people "wished" me. I didn't track what they said when I spoke first (because people often respond by repeating whatever phrase they hear), only what they said when they spoke first. I expected to find that in my current community, I would hear "Merry Christmas" more than 90% of the time. On the flip side, I expected to find that once I arrived in my hometown, I would hear "Happy Holidays" - or a wide variety of holiday wishes - more than 75% of the time. 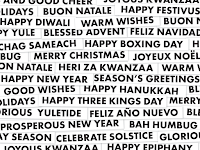