Writing
I cranked out as many articles and wrote as far ahead as possible this month, in preparation for a busy December. Here's hoping I did enough, and that what's waiting for me assignment-wise in January isn't too overwhelming!

Reading
I made it halfway through two books - The Librarian of Auschwitz by Antonio Iturbe and One Perfect Lie by Lisa Scottoline - before I had to return them to the library. I plan to eventually pick up where I left off in each...once I rise to the top of the request lists again.

In the meantime, I'm about to pick up my all-time favorite Christmas book - The Christmas Train, by David Baldacci - for the tenth (11th? 12th?) time. This book has a little bit of everything, from adventure and mystery to romance and humor, and in the end the author wraps everything up in a colorfully wrapped package tied with a perfect holiday bow. I highly recommend this novel - it's perfect for your holiday travels or break!

Watching
Well, Hallie and I finished Disney's Liv and Maddie, and I'm not embarrassed to admit that I loved every episode. She and I would are in search of another similar show - any recommendations?

And so begins the season of both traditional favorite as well as new Hallmark and Netflix Christmas movies. Hallie and I halfway watched The Christmas Break-In and Unaccompanied Minors (neither of which would I recommend), and we're excited to check out Klaus, Elliot the Littlest Reindeer, Christmas in the Heartland, Santa Girl, and Christmas Crush (only because it's a musical) at some point this month. (All are on Netflix.) These films are of course on top of our holiday favorites...we may have to watch a movie every evening in order to make it through our list!

Listening To
I started listening to The Dropout, about the rise and fall of self-made billionaire and Theranos founder Elizabeth Holmes, and within 10 minutes I was hooked. I expect to cruise through the podcast's six episodes quickly, and then it's back to Office Ladies! (I still can't decide if it's best to listen to an episode of the podcast and then watch the corresponding episode of the The Office, or vice versa...)

Edited to add: I finished all six episodes of The Dropout in just a couple of days. I'm in search of another podcast by the same team, as I really liked their investigative style. 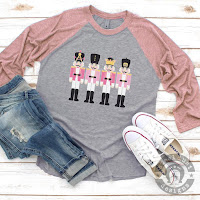 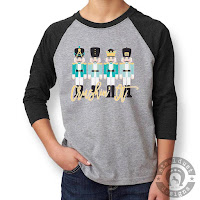 Trying/Using
I had been toying with trying Force of Nature - "an appliance that turns tap water plus a capsule of salt, water, and vinegar into a cleaner, deodorizer, and disinfectant as effective as bleach" - for a while, but I kept forgetting to actually order. A friend who had purchased the original Force of Nature (and loved it) upgraded to the deluxe version and offered me her first system. I took her up on her generosity, and now, after a couple of months of using the product, I'm all in. It's easy, affordable, and effective, and it contains absolutely no allergens, irritants, fragrances, dyes, preservatives, etc. Oh, and it's safe on stone surfaces, which was one of my primary concerns. I have no affiliation with this company or product, but I definitely give it two thumbs up!

Eating/Drinking
I bake a lot in November, but for the most part I stick with tried-and-true recipes: miniature loaves of banana bread for the kids' teachers for Thanksgiving, pans of chocolate chip brownies for Goodies of Gratitude (a Thanksgiving-themed staff appreciation event at the kids' schools), and gingersnaps for Tom's department Thanksgiving luncheon. Since I don't have any new recipes to share this month, I thought I'd reshare our gingersnap recipe, which ALWAYS delivers; I don't think I've ever taken these cookies to an event and not been asked for the recipe. Here you go - enjoy!

Feeling Good About
After learning the story of Sadako Sasaki and her 1,000 paper cranes*, students in the art classes at Hallie's school - Hallie included - embarked on the goal of folding 1,000 paper cranes themselves...in honor of a fellow student battling leukemia. They shared their plan with the school body, and recently the students reached and then surpassed their goal. 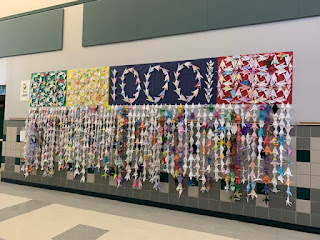 *Sadako Sasaki was exposed to high levels of radiation following the bombing of Hiroshima during World War II and eventually diagnosed with leukemia as a result of this exposure. While in the hospital undergoing treatment, she began folding Origami paper cranes. According to Japanese legend, making 1,000 paper cranes would result in the gift of one wish...and Sadako wished to survive her cancer. Sadly, Sadako passed away in 1955, 10 years after the bombing.

That's a wrap, November!
Posted by Chasing Roots at 5:00 AM