In Heaven There is No Beer

In Heaven there is no beer,
That's why we drink it here.
And when we're gone from here,
Our friends will be drinking all the beer.

We sang this song, loud and proud, while tailgating before Iowa Hawkeye football games, and it seems fans still feel this committed to their beer 20 years later. On September 14th, Iowa State's Carson King, having run out of beer, held up a sign on ESPN's College GameDay that read, "Busch Light Supply Needs Replenished". He included his Venmo handle on the sign, and within minutes the money started rolling into his account.

When it became clear that everyone felt this committed to their beer (and King had received enough money to purchase a few beers and then some), King announced he would donate the excess funds raised - everything minus $15 for his case of Busch Light - to the University of Iowa Stead Family Children's Hospital. And then the money REALLY started rolling in.

Donations from individuals were matched by major corporations - Venmo and Anheuser-Busch included - and as of earlier this month, King had raised nearly $3 million with matching donations For The Kids. A month after King's moment in the ESPN College GameDay spotlight, he returned to Kinnick Stadium to take part in the newest Hawkeye tradition: The Wave.

Last fall I wrote about The Wave, which also benefits - emotionally, rather than financially - the University of Iowa Stead Family Children's Hospital. And a few years ago, I wrote about For The Kids, which holds a special place in my heart, and its connection to the same hospital.

I share this story today because sometimes I want - no, I need, and I thought you might also need - to read a feel-good story...even if it's about beer. Cheers to turning a unique situation into an opportunity to make a difference in one little corner of the world!

I couldn't find a single tailgating photo of Tom and me, so you get these photos of our little Hawkeyes - 6ish years ago - instead. 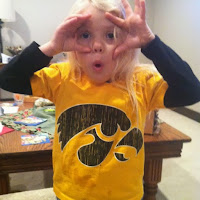 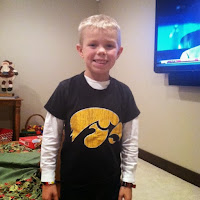