One
We survived Dance Rev. I had planned to write a lengthy post about how the past three conventions we've attended have been both amazing and challenging, and how this year's event followed suit. But while last year tipped the scales toward amazing, this year swung back in the opposite direction, throwing a wrench in my writing plans.

So today, in place of my original and now scrapped high five, I'm throwing up a high five for crossing last weekend off of my fall to-do list. I'm also sharing a handful of pics of the good moments, because I'm not completely empty inside. 😉

Three
First thing Monday morning I headed up to Will's middle school for what turned out to be a well orchestrated and truly moving Veterans Day assembly. Many veterans attended, and students in orchestra, band, choir, and theatre performed and presented. 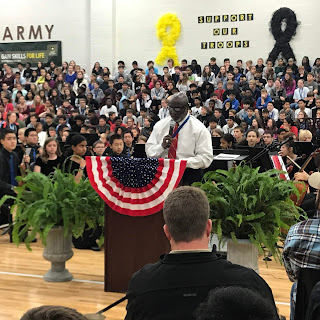 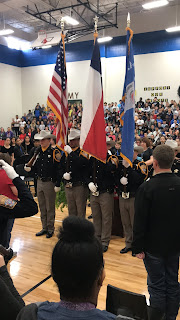 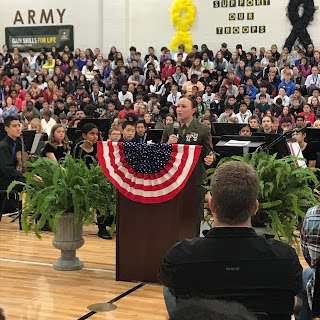 Four
Last Thursday, Friday, and Saturday Will tried out for his middle school's basketball team. He has attended a couple of summer basketball camps and messes around with his friends on the basketball court at the park, but he hasn't played on an actual team since right after his fifth birthday...and that season did NOT go well. Here's a little blurb from a blog post I wrote back in March of 2012:

As a reminder, Will didn't touch the ball AT ALL during the first three games. (Because he cried and ran away from the ball.) And aside from Will's very first soccer game, his third basketball game was the worst athletic hour of his (and maybe my) life. There was ice dancing. On the basketball court.

I expected Will's athleticism, competitiveness, and general affection for sports of all kinds to carry him through the first round of cuts, but I didn't expect him to actually make one of the teams...and then he did.

I'm so proud of him, because I don't think he was offered a spot based (at least solely) on his basketball skills. I think he was offered a spot because he has a positive attitude, demonstrates leadership on and off the court, and works tremendously hard. It has taken him YEARS to harness his potential in these areas, and while he still has room to grow, his progress is beautiful.

Five
You know what? Today I'm calling it at four high fives.

Cheers to the weekend, friends!
Posted by Chasing Roots at 5:00 AM