I started writing about the end of cross country season as a high five in a recent High Five for Friday post, but when I realized I'd drafted multiple paragraphs and included nearly 10 photos, I decided to turn it into a stand-alone post.

Middle school cross country has come to an end. The district meet took place about two weeks ago, and then last week the runners and their families gathered together to celebrate a fantastic finish at that meet as well as the kids' tremendous overall improvement as athletes and teammates. I enjoyed cross country - and Will's first foray into school sports - even more than I thought I would, and I look forward to watching from the stands screaming from the sidelines as he takes on his next athletic endeavor. 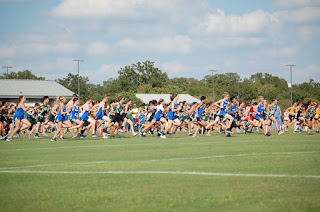 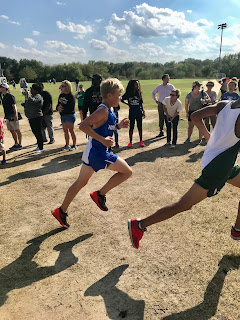 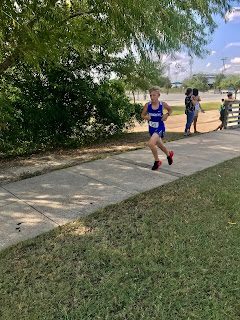 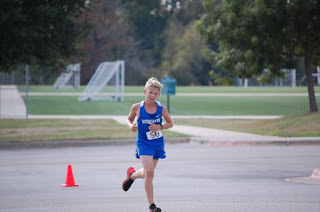 Cross country spectatorship can be challenging. These kids are running multiple miles throughout a park, and in order to see them at more than just the starting line and the finish line, parents have to run too. At every meet I jogged - and in some cases, sprinted - from the starting line to point A to point B to point C to the finish line, trying to be visible and audible (I am not a calm, quiet sports fan...) for Will as many times as possible. I had this visceral need for him to know that I knew he could do it, that he could overcome the exhaustion and the pain. And I figured it wasn't enough for me to simply tell him so before each race - he needed to see it for himself as he ran. And so I ran too.

My only regret this cross country season is that I don't have a single picture of Will and me together at any of his meets. The father of a friend of Will's did, however, capture a photo that I think means almost as much as one of the two of us would. When Will looks back on his cross country season - and when Will looks back on his childhood - I hope this picture reminds him that I did my absolute best to be there for him, and that I will always, ALWAYS, be his biggest cheerleader. 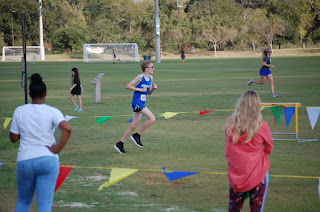 No, that's not Will running - the runner in this photo is Will's friend, Ben. Will is about three seconds behind Ben, and just out of the frame. (Will's finish line photo is above.) But look in the background... That's me, in the gray CSMS cross country shirt and royal blue shorts, sprinting - as fast as a perpetually achy 40-year-old mother of two can sprint when it's sunny and 95 degrees outside - from the final turn to the chute to cheer Will across the finish line. I hate running, especially in hot and humid summer weather. (I also hate posting pictures of myself running.) But I am willing to do both if it means being there for my boy and showing him firsthand that I'll always be his biggest cheerleader.

As I sign off on cross country season, I want to share something Glennon Doyle wrote about watching her son participate in the sport.

That's...my baby boy. He's running. On purpose. No one is even chasing him with dangerous weapons.

Cross country makes me so emotional. Sometimes, there's a warrior at the end of the pack, having a tough time finishing. So his whole team circles back, comes alongside him, and surrounds him - promises him he can do it - and runs him across the finish line. And I watch it and just weep. Every damn time. Because it just looks, suddenly, like it's On Earth as it is in Heaven.

Run somebody across the finish line today. Or let yourself be surrounded and carried across. Both: Heaven.

She speaks the truth. I saw firsthand this exact scenario play out more than once throughout the season and I cried, every damn time, because watching these kids tackle this brutal sport - and finish the race, even when doing so feels like the most impossible task in the world - is just so powerful. So uplifting. So inspiring. And it gives me tremendous hope for our future.