Writing
I finished up my Ferris Wheel article and can't wait for it to make its way into print. I don't have any writing goals for August - I want to spend all of my free time soaking up my kiddos before they head back to school and catching up with my friends after a month away - but in September my plan is to start drafting pitches. Time to map out the next few months!

Reading
This month I read No Exit, an interesting tale of mystery, suspense, action, and, to put it bluntly, revenge. The novel included more violence than I expected and would have liked, but (and this sounds like a strange compliment) the violence was incredibly well-written in that 1) I could picture exactly what was happening, and 2) it invoked in me the emotions - anger, disgust, and the desire for revenge - I assume the author wanted me to feel. The plot twisted and turned more times than I had anticipated, and from the halfway point on, I couldn't put it down. 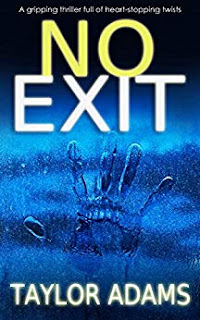 I have regularly read theSkimm, a daily news summary email, for about three years. It arrives in my inbox every morning, and at some point later in the day I read its abbreviated news articles, feel slightly downtrodden about the state of our country and the world, click delete, and head to YouTube for a funny cat video to make me feel better. This month, however, I discovered something to replace (who am I kidding - to read after watching) my funny daily cat video: CNN's the Good stuff. "the Good stuff: Good news, Good deeds, Good karma, Good ideas, Good people. A newsletter for the good in life." Check it out, friends. It arrives once a week on Saturday and I promise it'll lift your spirits.

Watching
Every Single Game of the World Cup. When the World Cup wrapped, we watched the ticker tape parade and all of the daytime, primetime, and late night interviews. When the hullaballoo surrounding soccer died down, Will switched over to the Tour de France, while I returned to Friends. I really need to branch out when it comes to what I watch on Netflix, but I feel the need to make it through Friends one more time before Netflix drops the series at the end of 2019.

We caught quite a few movies throughout the month. In the DVD category, we watched the 2006 remake of The Shaggy Dog starring Tim Allen. All four kiddos in the house - two boys and two girls ranging from six-years-old to almost 13-years-old - enjoyed it, and I admit to laughing out loud a few times myself.

In the streaming category, my sis-in-law and I watched Wine Country, which follows the funny ladies from SNL (Tina Fey, Amy Poehler, Maya Rudolph, Rachael Dratch, and Ana Gastyer, as well as a couple of others who have historically done more writing than acting but should definitely do more acting) on a birthday party weekend to...yep, Wine Country. I love these actors and their brand of comedy, and I found the movie particularly relevant given the stage of life in which I find myself.

In the theater category, my parents, the kids, and I saw The Lion King, which did not disappoint. I appreciated that the writers, voice actors, and musicians remained true to the original story, script, and songs while adding a few touches to make the film feel updated and current.

Instead, and on our road trip north (when Tom was asleep), Will and I listened to season one of Breakdown. This Atlanta Journal-Constitution podcast breaks down true crime cases and investigates breakdowns in the legal system; the first season delved into the case of a man - Justin Chapman - accused of setting a fire (in his own house) that killed his elderly next-door neighbor. Chapman's first attorney believed he was innocent, so when she failed to acquit him during their trial, she continued fighting to clear his name.

When Tom was awake, he and I listened to Arthur C. Clarke's 2001: A Space Odyssey. At times I had trouble making sense of Clarke's world, but eventually I allowed myself to just enjoy the story and stop worrying about whether or not I caught all of the details. Has anyone seen the movie? Should I watch it?

Wearing
After (what feels like and might actually have been) decades of searching, I have found my perfect athletic shorts: the Mesh Racer Run Short with a 4" inseam from Athleta. I took a chance and ordered my first pair online because a less popular print went on sale and I had both a coupon and a reward, but after falling in love with that pair, I visited the Athleta store while in Madison and picked up three more pairs for myself and two pairs for my sister. (Y'all, my sister despises shorts even more than I do - she hasn't worn shorts of any kind in at least 15 years - and she actually kept both pairs.) They have a no-slip, wide waistband, the top of which hits just below my bellybutton; the materials are soft, light, and breathable; and they have two hidden, flat pockets. I bought black, black olive camo, and tanzanite blue for myself (the first pair I bought - white with brightly colored wildflowers - is no longer available) and black olive camo and violet blush for my sister. Coastal teal is on sale now though, so I might have to add one more pair...

Trying/Using
The college-aged daughter of a friend recently started Turner Letter Co., a paper goods business - she does beautiful hand-lettering and calligraphy - "dedicated to finding joy in the little things + celebrating the season of life that you're in". My dad and I hired her to paint this picture of my parents' house as a gift for my mom. 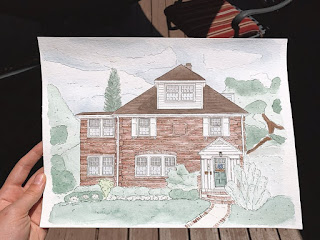 Hannah does lovely work, and truly cares about creating a product that will please her clients. She does custom cards, paintings, and wood signs, as well as quite a few clever greeting card sets and stickers (for laptops, water bottles, etc.) that are available in her Etsy shop (and you can see more pictures of her work on her Facebook page). I highly recommend her!

Eating/Drinking
July was all about enjoying - perhaps indulging in - my Wisconsin favorites: Spotted Cow beer, Wollersheim Winery wine, Bucky Badger pretzels and honey mustard pretzel dip, cheese curds, Chocolate Shoppe ice cream, Babcock ice cream, The Village burgers, Rocky Rococo pizza, Greenbush Bakery donuts, Michael's Frozen Custard banana shakes, Noodles mac & cheese, Bagel's Forever bagels, and of course, Friday night fish frys. I make none of this food myself, so I can't share recipes. I can, however, encourage you to visit the Madison area to work your way through this lengthy list of dining establishments and must-have beverages, snacks, entrees, and treats. Oh, and if you ever drive through Washington, Illinois, Michael's spaghetti and garlic bread cannot be missed.

In August I usually stick to tried-and-true, freezer-friendly recipes; I make double batches, one of which we have for dinner that night and the other of which I freeze for a future dinner. In September I'll start trying some of the delicious-sounding recipes I bookmarked this month, and I'm considering purchasing an air fryer at the recommendation of a friend - any air fryer fans out there?

What new and exciting in your world this month?
Posted by Chasing Roots at 5:00 AM