On our most recent trip to Wisconsin I crossed three experiences off of my Wisconsin Bucket List. Sometimes I struggle to figure out how it's taken me so long to visit - or return to - these places...but when I remind myself how challenging it is to go anywhere when my parents, my sister and her family, and my family of four are all together, it's not so hard to figure out anymore. 😂

Devil's Lake State Park
I visited Devil's Lake State Park as a child but have wanted to return for years, as I have no memory of that first excursion. The park is located about 35 miles northwest of Madison, just south of a small town called Baraboo. It holds the title of biggest state park in Wisconsin, and is known for is quartzite bluffs and beautiful lake, which is nestled in the Baraboo Hills and was created thousands of years ago when glacial deposits permanently blocked the open ends of a gap between the bluffs.

We started our day with a "hike". I use quotations because the way up felt a heck of a lot more like rock climbing than hiking. Shockingly, the youngest member of our group - six-year-old Carter (whose whiny declaration, "I'm not a fan of walking", has become one of the most famous and repeated in our family) - led the way, never slowing unless we yelled for him to do so. The rest of us followed steadily, wanting to take breaks but knowing we couldn't because Carter would leave us behind. The climb was challenging as well as fun, and the views as we neared the top made every bead of sweat that ran into my eyes and ears worth it. The actual hike down included lots of singing, laughing, and talking within our group, as well as with those heading up the side of the mountain on which we traveled down. Multiple people stopped us to ask 1) about Hallie and Lily's matching hiking attire (otherwise known as patriotic swimsuits) and/or 2) how much farther until they would reach the top.

After finishing our exercise, we had hamburgers and french fries for lunch in the Chateau and shopped the park gift shop before heading out to the lake. The kids played for hours in the sand and in the water, which was crystal clear, warm(ish), and offered a zero entry "built" by Mother Nature more perfectly than those in most swimming pools.

Visiting Devil's Lake State Park comes with a fun perk: riding the Merrimac Ferry. Faster routes to the park are available, but as the kids had never taken a ferry before, we opted for a scenic ferry ride across the Wisconsin River instead. Another perk: the ice cream shops conveniently located on land at both ends of the ferry's route. 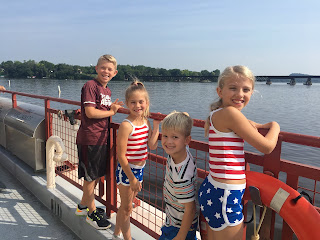 I don't know that our family will visit Devil's Lake every year, but as Tom and Jeff missed the hike - er, rock climbing - we might have to plan a return trip. The park would be STUNNING in the fall, if we only had the time to travel to Wisconsin between late September and early November.

Mad-City Water Ski Team Summer Show
I watched the Mad-City Water Ski Team's summer show as a young child, but as is the case with Devil's Lake State Park, I don't remember the experience. For years I have tried to make it to Madison's Law Park on a Sunday evening to see the group perform, but for some reason it took until this summer for the stars to align.

For those unfamiliar, water ski shows - at least those that teams enter into competitions - involve more than just waterski tricks and stunts. They generally follow a storyline (the Mad-City team did Wizard of Oz this year, which was perfect for my Dorothy) and include 13 acts which are judged on skiing, boat driving, land performances, and announcing. Between Memorial Day and Labor Day, the Mad-City team performs this show once a week in Madison but also takes the show on the road to both regional and national competitions. Mad-City Water Ski has won the National Championship 10 times since 1975, and has brought home first place from the Wisconsin State Show Ski Tournament - the largest of its kind in the world - in 2012, 2015, and 2017.

Members of the team range in age from six to 60, and all participate as volunteers. The team trains year-round, spending the winter months perfecting their lifts and turns in local gyms. The skill and athleticism on display when the skiers step out onto the water - human pyramids, swivelers, jumpers, and ballet - are nothing short of impressive, and the land acts, while not quite Broadway quality, keep the show moving and fill the gaps while skiers and drivers are setting up for the next stunt.

I enjoyed the show as much if not more than I thought I would, and the kids - even Will, who was EXHAUSTED having come straight from four days of soccer camp and fell asleep in the grass before the show started - loved it. The water ski show might move from the Wisconsin Bucket List to a Wisconsin tradition!

Wollersheim Winery
After my sister and I reached the age of 21, we started enjoying an occasional glass of wine with our parents when we came back to Wisconsin to visit them. We stumbled upon one of Wisconsin's finest and favorites - Prairie Fumé- and found that despite our differing preferences, we all enjoyed this wine. As it turns out, this was the winemakers' goal 30 years ago: to create something new and different...something "vibrant, young, and bright" that could be enjoyed by nearly everyone as opposed to just experienced wine drinkers. I Philippe Coquard and Bob Wollersheim achieved their goal!

Prairie Fumé is made and bottled at the Wollersheim Winery in Prairie due Sac (hence the "Prairie" Fumé). I had long wanted to visit the winery to sample their other wines and beverages and to see the vineyards, and on this trip my mom and I managed to slip away - leaving three or four kids with my dad (thanks, Dad!) - to do just that.

We tasted six different varieties, and ended up buying bottles of most of them...along with quite a few more bottles for ourselves and friends. When we finished shopping, we went outside and admired the vineyards. We would have stayed longer - and perhaps enjoyed a glass outside on the hillside patio or in the wine garden - but the temperature outside that day reached almost 100 degrees. (For about a week in the middle of our trip, Wisconsin set daily heat records.) 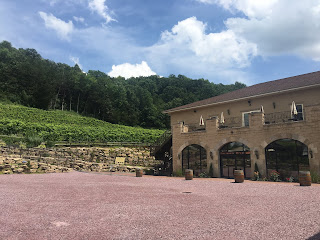 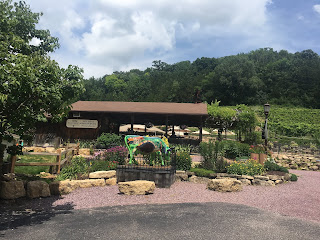 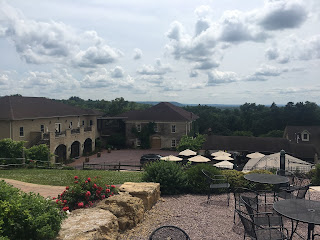 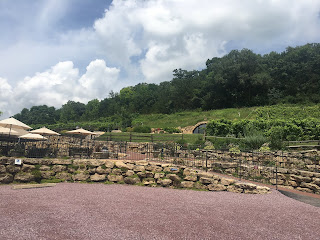 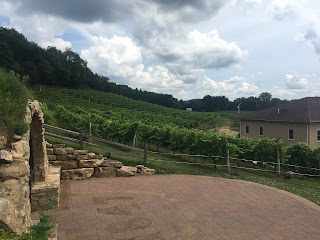 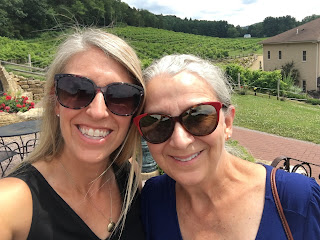 Just like Devil's Lake State Park, Wollersheim Winery would be spectacular in the fall.

I highly recommend all three of these Wisconsin Bucket List activities should you ever travel to Madison or the surrounding area - or if you live near Madison but have never given them a try. Especially in the fall! 😉
Posted by Chasing Roots at 5:00 AM