Texas Bucket List: Where They Were Laid to Rest

My Texas Bucket List began taking shape shortly after we arrived in College Station. At first the list consisted of only a few touristy day trips and experiences (think Six Flags, SeaWorld, etc.) I'd thought of or heard about prior to our move. But as we made new friends, especially new friends who grew up in Texas, we learned from them about the lesser-known - at least to Midwesterners - but not-to-miss sights and sounds of the Lone Star State.

You can see my full - but ever-growing - Texas Bucket List here. Feel free to let me know what I'm still missing!

I had every intention of visiting the graves of both Barbara and George H. W. Bush following their deaths and funerals. I wanted to take the kids with me, however, and because the gravesite location was only open to the public for a week after each burial (or so I thought - I don't know now if that was actually the case), I missed my opportunity.

Or so I thought.

During their last visit to Texas, my parents asked if we could tour the George H. W. Bush Presidential Library and Museum. I've walked the museum and adjacent Barbara Bush Rose Garden a few times (and written about both for Texas Living magazine), but I enjoy the museum and happily took them to see this College Station landmark.  After we finished inside, I noticed a map to the gravesite posted outside the front doors. We decided to brave the chilly temperatures and drizzling rain and make the walk to the far side of the property, not knowing what we would have access to or even be able to see.

As it turns out, the gravesite was open to the public that day, and we were able to pay our respects to George, Barbara, and their daughter Robin, who died at the age of three and is buried with her parents. After witnessing Barbara last April and George last December return "home", I felt a sense of closure when I saw where they had been laid to rest. 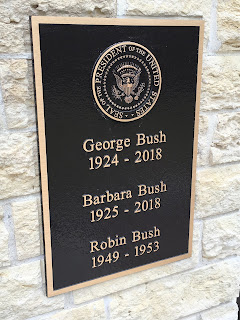 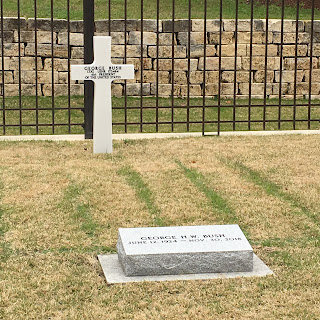 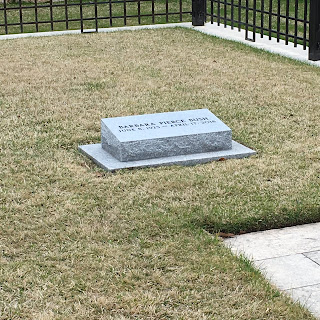 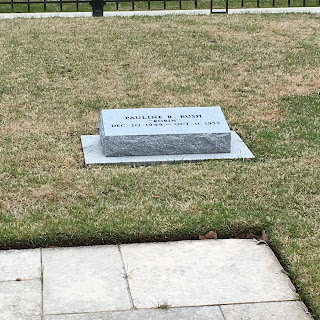 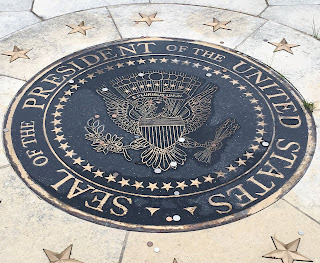 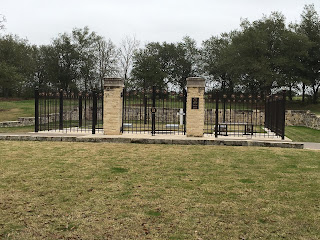 I plan to take the kids back at some point this spring or summer, perhaps when Hallie and I venture out for our annual flower photography session. I can't pass up the opportunity to share with them yet another gem in our small Texas town.
Posted by Chasing Roots at 5:00 AM