After YEARS of waiting, my mom, my sister, and I finally found our way into the audience for...HAMILTON. 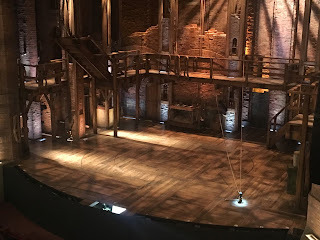 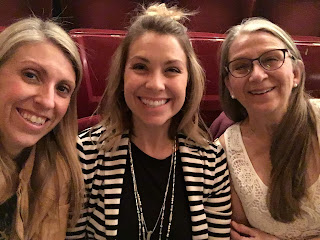 For those unfamiliar, Hamilton: An American Musical tells the story of Founding Father Alexander Hamilton. The music and lyrics were written by Lin-Manuel Miranda and are uniquely performed in a combination of styles ranging from hip hip and rap to pop and traditional show tunes. Also unique to Hamilton is the intentional casting of non-white actors as the musical's lead characters.

Arriving on Broadway in August 2015, Hamilton did extraordinarily well both in the eyes of the critics and at the box office. The show received 16 Tony nominations and 11 awards - included Best Musical - in 2016.

Back then I couldn't make a trip to New York City to see Hamilton work with my schedule or my wallet, so I held out hope the show would one day open in Chicago, which often occurs when musicals and plays do exceptionally well on Broadway. Thankfully, Hamilton did eventually make its way to Chicago, and we eventually made our way into the seats at the CIBC Theatre.

Generally speaking, I knew what to expect when we bought the tickets but I intentionally didn't learn the words or even listen to the songs beforehand; I wanted the show to feel as new and different and progressive as it did for those who had the privilege of sitting in the audience in the very beginning.

Fully comprehending the lyrics - many of which are rapped - was difficult at first, but after a couple of songs I could more easily follow along. By the end of the show I felt ready to tackle rap myself...if only I knew any raps other than Sir Mix A Lot's Baby Got Back and one I learned in third grade about different kinds of maps. ("A picture of the world, now that's a map, and if you knew that give your hands a clap.")

The cast of the show did an excellent job, and the actors who portrayed George Washington, Aaron Burr, and King George blew me away. Also impressive were the choreography and set design, both of which truly enhanced the story rather than solely providing entertainment. Last but not least, I tip my hat to the orchestra, as it nailed what I deemed a significant number of complicated collaborations with the cast.

For me, Hamilton was an incredible experience. The musical itself didn't displace any in my top three spots (Into the Woods, Joseph and the Amazing Technicolor Dreamcoat, and Rent), but it was - is - an incredible production conceived and actualized by a creative genius.

Click here to see if Hamilton: An American Musical is coming to a theater near you!