Writing
An article I wrote about the historic Stagecoach Inn in Salado, TX made its way into the December issue of Texas Living, and I wrote about how to take care of yourself - survival of the fittest, so to speak - throughout the holiday season for the Mama Bear Dares blog. The holiday season may have come and gone, but the suggestions are still relevant and may help you through a busy January; check them out if you have an opportunity!

Reading
A few months ago I started seeing Gather the Daughters appear on recommended reading lists. The premise sounded interesting, so I added my name to the book's waiting list at the library and when a copy finally became available at the beginning of December, I made my way through its nearly 400 pages before we left for Wisconsin.

I don't know that I can recommend Gather the Daughters. Stylistically speaking, I found the writing slightly difficult to follow. The story is told from multiple (maybe six or seven?) different perspectives on a chapter-by-chapter basis, and I had trouble jumping from one character to another so frequently and with no apparent pattern. With regard to content and substance, Gather the Daughters took a far darker and more depressing turn than I bargained for. The intriguing premise morphed into a dispiriting plot and then dissolved into a haunting pseudo-resolution. When I finished the story I felt unsettled and disheartened and couldn't find either the closure or piece of mind I expect - and need - to feel when I close a book for the last time.

Here's a link to a description of the book so you can decide for yourself if you're willing to take the plunge!

Watching
I had high hopes for A Christmas Story: Live, but I thought the production fell short. The actors turned in acceptable - and in some cases, excellent - individual performances, but the musical as a whole never gathered quite enough steam. Additionally, on our broadcast the audio and visual components didn't sync which made watching difficult and frustrating. I'm looking forward to the next live musicals - Jesus Christ Superstar, Bye Bye Birdie, A Christmas Story, and Rent - and hoping they come in with slightly stronger showings!

Anyone seen Star Wars? I enjoyed Episodes IV, V, and VI as a child, but I didn't feel the same way about Episodes I, II, and III when I saw them during my college years. I can't say for certain why, however I suspect it had to do with the fact that I have never been a fan of a few of the actors chosen for The Phantom Menace, Attack of the Clones, and Revenge of the Sith. Episodes VII and VIII, however, made me a Star Wars fan all over again. I loved going to see these last two films in the theater with Tom and the kids; it's particularly fun to sit next to Hallie, who asks loads (far too many for a quiet movie theater) of questions but also pays careful attention, catches most of the humor, and cheers for the heroine. 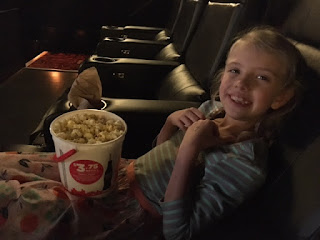 We didn't catch any documentaries in December - too many Christmas specials to sing along with - but we're looking forward to getting back to our Tuesday night documentary showings in January!

Trying/Using
Hallie loves to bake but fears the inside of the oven, so my mom bought this oven push puller. It's kind of adorable and works surprisingly well - I highly recommend it for your budding bakers and/or chefs! 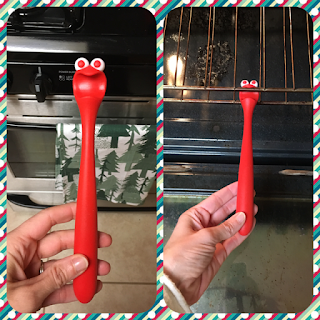 Both Will and Hallie (as well as their cousins, Lily and Carter) received mermaid bracelets from the Mermaid Pillow Co. in their stockings. These bracelets - as well as the pillows the company made first and for which they became known - cost more than the versions you might find at Target or Wal-Mart, but the quality and craftsmanship are far superior and the company occasionally offers discounts if you purchase more than one at a time. (Some friends and I bought a bunch together, which decreased the price and made shipping free.) 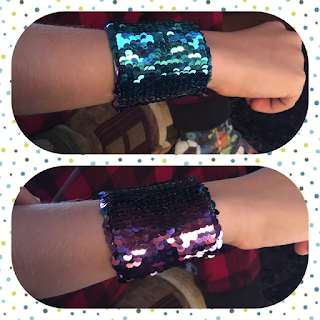 I have no affiliation with nor did I receive any compensation for writing about either of the above-mentioned products. I'm just a happy customer!

Wearing
Throughout the last two weeks of December I wore more layers than I've worn in the previous two years combined. I need to get outside for a walk every day - even when the temperature outside can't climb out of negative numbers - and to do so I would wear two pairs of smart wool socks, long underwear pants, leggings, a tank top, a long underwear shirt, and a sweatshirt...and then top it all off with snow pants, winter boots, and a winter coat, hat, mittens, and scarf. I looked a little like the snowsuit-clad younger brother who can't put his arms down in A Christmas Story...

I also may have worn this Christmas sweater - which made me look like a wrapped holiday gift - out in public twice. 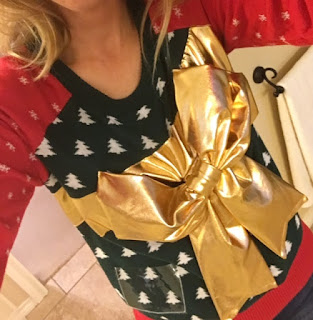 Besides baking up a storm, we found two dinner recipes worth noting and making again:


What's new, good, and/or interesting in your life this month? Please share!
Posted by Chasing Roots at 5:00 AM