After a busy afternoon and evening, I finally had the kids fed, bathed, and in bed around 8:45pm. I took a shower, put on my pajamas, and settled in to tackle a few work- and PTO-related projects. About 10 minutes later, I heard Tux at the backdoor, meowing to come inside. I set down my computer, walked to the kitchen, and opened the door.

Tux bounded out of the dark night and into the dark kitchen making a strange noise. He ran frantically through the house until he skidded to a stop in the living room...where he proudly dropped a mouse - a very alive, very terrified mouse - on the rug. (I mention the dark night and the dark kitchen because when coupled with a dark cat and a dark mouse, they made it impossible for me to see that Tux had a mouse in his mouth when he was outside and also once he came into the house.) I screamed louder than I have ever screamed before in my life, jumped up on the chair, and called my friend and neighbor, Rebecca.

I called Rebecca because as bad luck would have it, Tom was in Austin at a conference. Why do these things always happen when the bravest family member is gone?!

I asked begged - as calmly as possible (which apparently wasn't very calmly, because later Rebecca told me that she thought I was either hysterically crying or hysterically laughing) - if she would send her husband, Matt, over to help me catch the mouse. Matt arrived two minutes later. #bestneighborsever

Matt and I began assessing how to best capture the still very alive and very terrified mouse. For a while Tux helped us by keeping the mouse contained under the entertainment center, but eventually he gave up and flopped down on the living room rug to watch us work. Meanwhile, Rebecca arrived and brought with her our friend, Jenn, with whom she'd been working out at the gym when I called. #bestfriendsever

For what felt like 15 minutes (it may have only been five - I have no idea), the four of us chased the mouse around the house with flashlights, brooms, and tupperware containers as it darted in and out of various rooms. Will "helped" by standing on the kitchen counter, screaming intermittently, and taking pictures of the chaos.

Eventually Jenn - my hero - trapped the mouse beneath a tupperware in the dining room and Matt - my other hero - slid a pizza box under the tupperware container and transferred the mouse out of the house and into the backyard. When all was said and done, we sat back and surveyed "the damage" (most of the furniture in my living room had been moved and there was dust everywhere), Will finally climbed down from the counter, and we all laughed about how much "fun" we'd had catching a mouse. Oh, and Hallie slept through the entire scream-laced adventure.

Below are a sampling of the pictures Will took. As you can see, most were taken from a vantage point above the ground (perched atop the counter) and nearly all are blurry, which I think captures the chaos of those minutes. 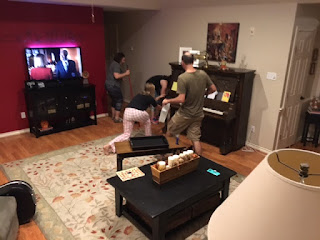 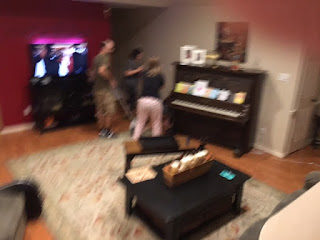 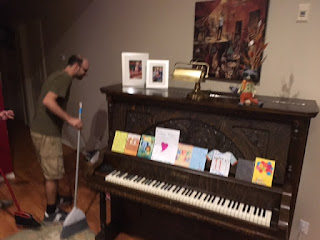 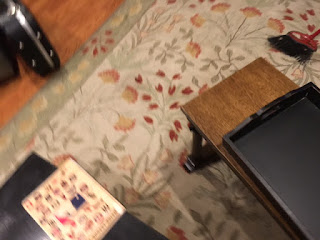 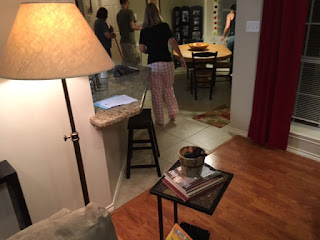 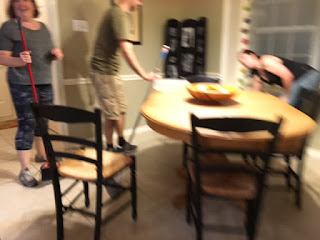 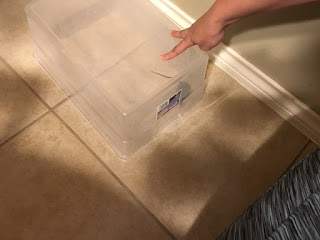 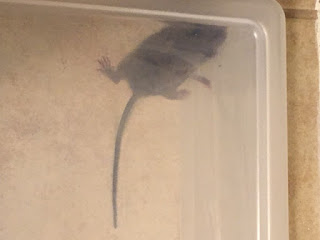 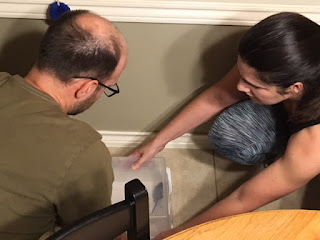 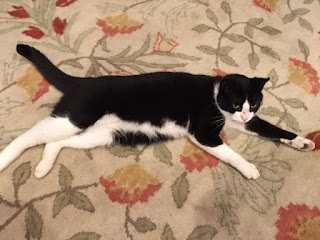 An exciting night in the House of Mouse!

Tux had already left a dead lizard in Tom's shoe earlier in the week, so the mouse really pushed me over the edge. Tux's punishment will be to wear his Halloween tutu, sit in the corner, and think about what he did. 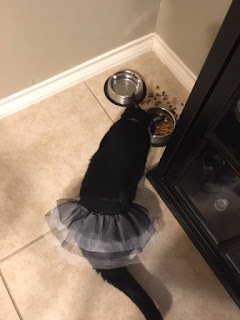