We want to “travel the world” which starts with one country. We want to “get in shape” which is the result of healthy, mindful habits. We want a “meaningful career” which for most people comes after a lot of trial and error. It doesn’t arrive to you one day. You arrive at it after years of showing up and trying a little harder than you did the day before.

This story is not about a particularly amazing feat, physically or emotionally. But it is my story of achieving something big by doing many small things.

This story belongs not to me, but to a good friend of mine. Katie and I met in sixth grade, at the beginning of middle school. I honestly can't remember our first encounter, but I believe we found each other through mutual sixth grade friends and became close when we realized we scored similarly low on the tween coolness scale. Picture big pink glasses, high-wasted cotton shorts, and frizzy hair styles circa 1991/92 and you have some idea of what Katie and I looked like as our friendship took flight.

Katie and I remained close throughout our high school years, and once we headed off to college in different states (and then moved even further away from one another after college) we stayed connected by catching up in person when back in Madison and using various forms of social media.
Katie was kind, fun, and funny, and back then she seemed to me extremely confident in who she wanted to be, what she wanted to do, and where she wanted to go. I know she is still kind, fun, and funny, and judging from her latest ambitious endeavor, she remains as confident and goal-oriented as ever.

A couple of years ago and inspired by Dean Karnazes' Ultra Marathon Man documentary, Katie set for herself a big-picture goal of running a 5K in all 50 states. She had, as she put it, "the time, the interest, and the will to always want to be able to run a 5K". She had friends living across the country, and was looking for a reason to travel back to some of her favorite states as well as to those states she had yet to visit. And she had the ability to recognize that the only way to achieve something big is by achieving something small, over and over again.

As of my most recent check, Katie has run in 37 states and Washington D.C. When I asked which of these runs had earned the status of "favorite", she gave me more than one. "This is such a tough question!! CT was exciting because it was the first intentional run. VT was powerful because it brought an epiphany of the kind of changes I wanted to make in my job and relationships. ME and VA were some of the most beautiful routes. Those were also two states I ran when I reconnected with old friends from college, which made both of those runs extra special."
Recently Katie decided to expand on her goal of running a 5K in all 50 states by attempting to turn 5K into 5K...in monetary donations to support the Southern Poverty Law Center.

Southern Poverty Law Center aims to "fight hate and bigotry and seek justice for the most vulnerable members of our society...and works toward the day when the ideals of equal justice and equal opportunity will be a reality." I won't ask you to make a donation, but if you find yourself looking for a way to make a difference - or to just do something - in the midst of this heartbreak in which we as a country find ourselves, I encourage you to read a little about this organization and consider supporting Katie as she aims to achieve something big by achieving something small, over and over again. 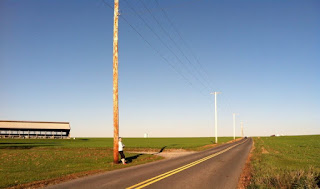 Next up for Katie? Perhaps the national parks in Utah or Las Vegas, Nevada. She's also always on the lookout for an inexpensive ticket to Alaska!
Posted by Chasing Roots at 5:00 AM