Since I threw in a Flashback Friday post in place of a High Five for Friday post last week, today's HF4F posts covers a couple of weeks of high fives.

1. First and foremost, a Hurricane Harvey update. Though we (our family) experienced backyard and patio flooding and we (our community) experienced a few set-backs in the form of localized flooding, school cancellations, delayed trash pick-up, and indefinitely suspended mail service, we are safe and dry. Those in and around Houston were - are - not so lucky, and for millions of people, the long road to recovery has only just begun.

The devastation is heartbreaking, but the stories of bravery and good will and generosity borne of this tragedy give us all something hopeful and inspiring to which we can cling. One of Mr. Rogers' most famous quotes grew out of his mother's words of wisdom. When he would see scary things on the news, she would say to him, "Look for the helpers. You will always find people who are helping." Never have I seen more helpers: first responders, second responders, and community partners, but also "average Joes" who simply decide to take a day off work, tow their boats to Houston, launch themselves into the dangerous flood waters, and save some lives.
On a lighter note, I've also seen the "I have a six-pack of beer and I'm going to share it with the meteorologist who's been broadcasting live from inside a hurricane for two days straight" kind of helpers. That's Texas hospitality, folks.

As I mentioned on Monday, I encourage those who would like to help to make a financial or blood donation to the American Red Cross by visiting www.redcross.org or calling 1-800-RED CROSS. If the Red Cross is not your preferred disaster relief organization, here are a few options recommended by the NY Times.

2. Second, a massive THANK YOU for your overwhelming support and tremendously kind words in response to my "Dear Abby, From a Changed Mom" post. I feel exponentially better about the entire encounter now, in part because writing about the experience and then sharing it widely allowed me to lessen the heavy weight resting on my shoulders, and in part because you made me feel like my parenting decisions had not been completely crazy and/or damaging to my children. I appreciate you and am both grateful for and humbled by your readership, kinship, and friendship.
3. Third, a quick overview of the fun we had during the last week of summer vacation. Lots of playdates, a birthday swim party, eclipse watching, three meet-the-teacher nights at elementary school, and "walk the halls" at intermediate school. I also had good meetings with Will's new school's nurse about his allergies and with Hallie's new teachers about her Tourette's. Then we spent our weekend, thanks to Hurricane Harvey, doing considerably less than we had originally planned. Will's soccer game, the soccer club's fundraiser, Hallie's Nutcracker audition, and a birthday dinner were all cancelled or postponed; though we wish it would never have arrived here in Texas at all, Hurricane Harvey offered me an opportunity to catch up at home before we headed back to school. 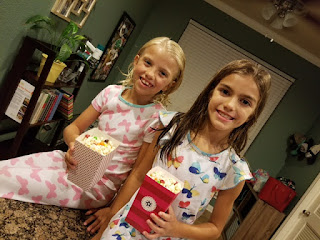 4. Fourth, overall the kids had a good first week of school. Starting a day later than anticipated threw us for a loop initially, but turned out to be a blessing in disguise. Monday afternoons revolve around three dance classes and a soccer practice, but we have absolutely nothing scheduled for Tuesday afternoons; Monday's cancellation meant all those other activities were canceled too, and we could ease into the week with an activity-free Tuesday afternoon. Both kids came home at the end of their first days with huge smiles on their faces and only positive things to say about their schools, classes, teachers, and friends...and then we had time to pop into Spoons for a quick treat. 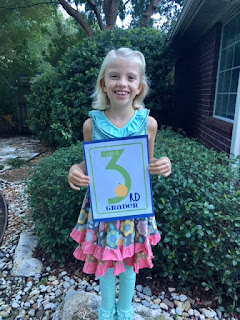 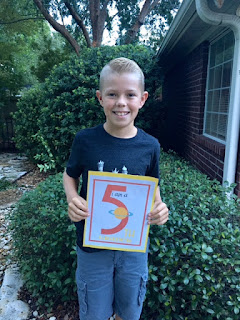 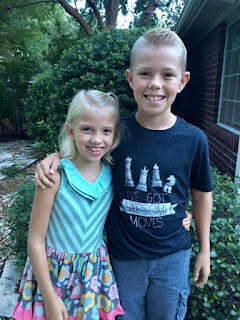 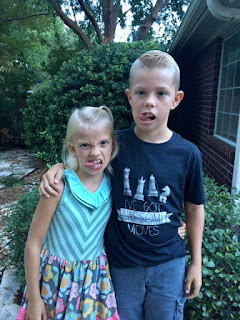 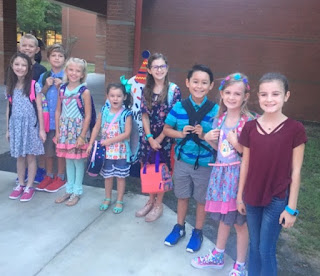