10 years ago Tom and I left baby Will with his grandparents and went on a much-needed date to the Fred Scheers Lumberjack Show in Woodruff, WI. Within a few years I forgot most of the specifics, but I remembered enjoying the show and knew that someday I would take Will and Hallie to experience this diamond in the north woods rough.

Someday turned out to be a full decade later.

Earlier this month and on an otherwise unscheduled afternoon, the kids and I - along with Tom's parents and sister - loaded up and drove into town for the show. We climbed the rickety wooden bleachers and chose seats far enough back for the awning to block the sun but not so far that if the kids fell through the openings between the benches they would seriously injure themselves (an actual and somewhat serious concern). As we settled in and I began to take in my surroundings, I vaguely recalled two details about the show. First, the skit-like narrator-led portions - carefully interspersed among the sport portions to provide the lumberjacks time to prepare their equipment and materials for the next segment - are cheesier than Wisconsin's finest cheddar. And second, embracing that corny, cliched, and well-worn (I recognized some of the jokes from 10 years prior) "cheese" makes the experience not only bearable, but amusing and at times, delightfully entertaining. 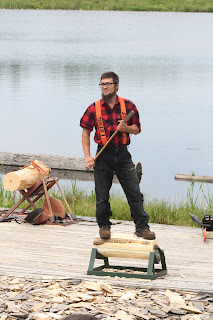 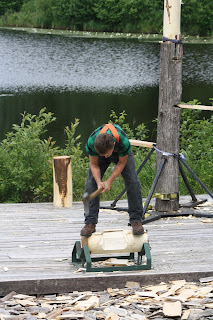 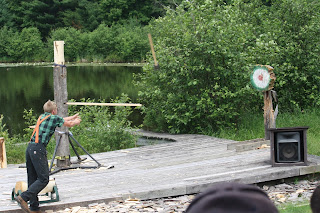 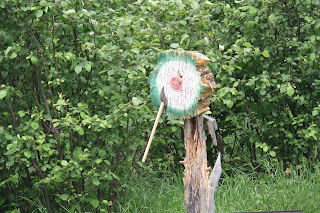 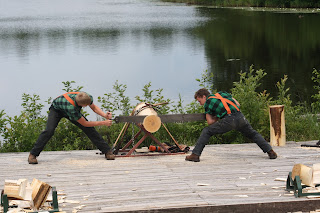 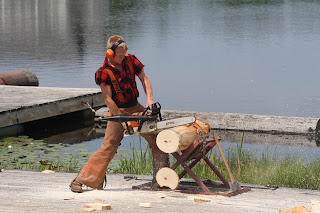 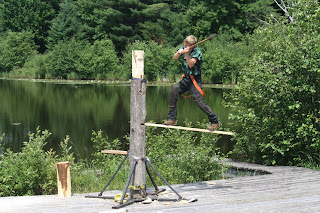 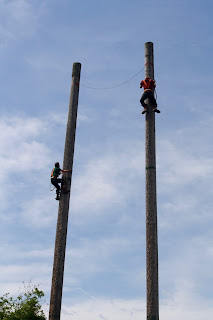 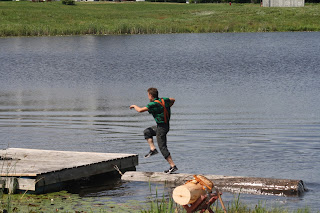 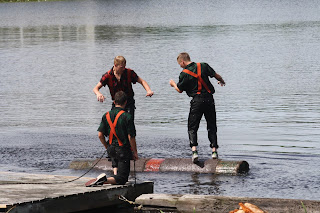 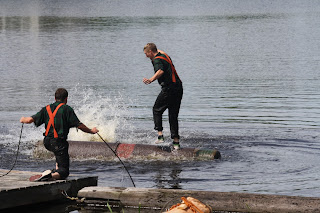 My favorites included log rolling, pole climbing, and the axe throw. Will also loved the log rolling, not so much for the skill it required but because one of the lumberjacks fell - in a choreographed stunt - on his nether region. Boy humor baffles me...

During "intermission" (I don't quite know what to call a break in the middle of a lumberjack show), the host/narrator/master of ceremonies invited any interested children down to the "stage" (again, I don't know what to call the wooden platform on which the majority of the chopping, sawing, and throwing took place) to try their hands at cross cut sawing. Because only in Wisconsin do we sell beer and invite children to work with sharp objects at the same venue. 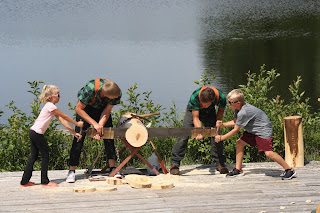 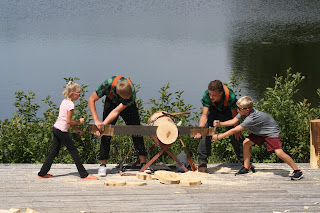 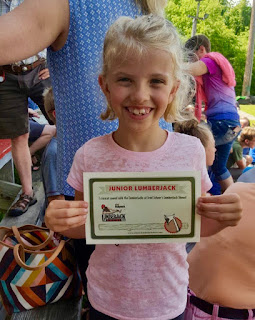 I waited 10 years to take my kids to see lumberjacks in action, and Northern Wisconsin's showcase did not disappoint; seeing the smiles on Will and Hallie's faces and listening to their belly laughs (not to mention their cheers and jeers, which were not only encouraged but expected of audience members) made my smiles bigger and my laughter louder. I doubt we'll attend the show every year, but I know we'll return again someday...when enough time has passed that the every ounce of cheese and every slightly inappropriate joke feels new again. 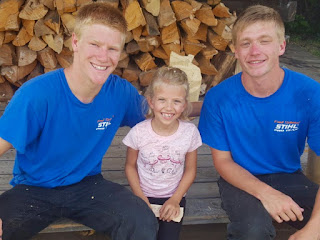