The Year in Review

2011 was a year of significant change for our family. In January we left our lives in Ann Arbor, MI – our home of six years; many wonderful friends; our University of Michigan, Red Cross, and Vineyard “families”; and my job as the Director of Volunteer Resources at the Red Cross – and moved 1,291 miles away to College Station, TX.

The reason for our move was an exciting one though: on January 1st Tom joined the faculty at Texas A&M University as an Assistant Professor in the Industrial and Systems Engineering Department. He works exceptionally hard – often harder than he worked during his last months of graduate school (I wouldn’t have thought that was even possible) – and while he might tell you he’s still trying to find his groove, I’m pretty darn proud of all he’s accomplished in less than a year. Tom’s free time, what little he has of it, is spent on the disc golf course or playing Wii with Will; reading books, making music, or dancing with Hallie; and helping me tackle projects around the house.

Will is somehow already five years old. (I’m lucky though, because while Will’s getting older, I remain the same youthful 27-year-old I was when he was born.) Wildly competitive and extremely driven, Will loves all sports but gravitates toward and is very good at soccer, golf, and disc golf. He plans to try basketball this winter and baseball next spring, but I’m not sure what to expect on the court and diamond given Will’s fear of catching balls… When not focused on sports, Will spends his time on Star Wars, super heroes, sword fighting, video games, Checkers (I expect he’ll be skilled enough to beat me in about two weeks), Memory (at which he can already beat me), math puzzles, and reading. On a good day – one when Will and Hallie aren’t trying to drive each other mad – Will especially enjoys reading to his little sister. While she sits on the potty. It’s a heart-warming but odd scene.

I have never feared my children growing up, but as Will approaches kindergarten (he missed the cut-off to start this fall by 33 days, much to his dismay), I’ve begun to wish, for the first time, for a way to slow the clock and keep my little boy a little boy for a little while longer.

Hallie is two AND A HALF, and is a beautifully complicated blend of – nope, not her parents – her two theatrical and musical aunts. She loves identifying numbers and counting, but prefers to do so while twirling through the living room in her tutu and ballet slippers while I quiz her from the couch. She loves reviewing the sounds and shapes of letters, but only if she can do so melodically or while painting and glittering them across heart-shaped pieces of pink construction paper. There is no doubt Hallie was born with a flare for the dramatic and a song in her heart.

2011 was a year of milestones for Hallie: she graduated from a crib to a big girl bed, traded her suckers (pacifiers) to the Sucker Fairy for a “peent jumping rope” (pink jump rope), and most recently, decided she was done with diapers. She does absolutely everything ALL BY HERSELF and when she’s good and ready, and she can’t be bribed with anything except donuts. But along with being ridiculously stubborn, Hallie is also extremely social, enthusiastic, diplomatic, and organized, all traits that will serve her well – as I’ve been told by three different teachers at two different schools – when she’s the President of the United States… Perhaps you’ll see my little spitfire’s name on the 2044 ballot. ☺

For the first time since I graduated college I am without a regular job outside the home. Despite that, I find myself busier than I’ve ever been, perhaps in part due to my newfound love of blogging at Wiggles and Midwestern Girl and for the National American Red Cross. When not at my computer, I can be found substitute teaching at the kids’ preschool; volunteering for the local Red Cross; assistant coaching Will’s soccer team; and shuttling kids to and from soccer games, swimming lessons, and Zumbatonic classes. There is no doubt I miss the Red Cross – especially MY Red Cross in Ann Arbor – and an official career outside the home, but I am certainly not unhappy where I am today.

As this year of change comes to a close, I am more grateful than ever before for the love and support of our families and friends. There is no doubt that without our parents and siblings and our friends old and new – without all of you – I wouldn’t be smiling today.

I wish you all the best for a peaceful and joyful new year.

Erin (and Tom, Will, and Hallie too) 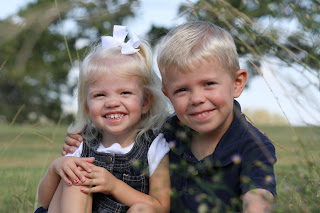