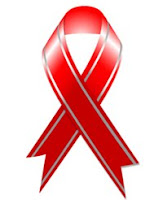 Today, December 1st, is World AIDS Day. For as long as I've been involved with the American Red Cross, the HIV/AIDS epidemic has been considered an emergency dire enough to warrant the organization attempting to "prevent, prepare for, and respond to" its wrath.

It will come as no surprise to you then, that I wrote about World AIDS Day for this week's Red Cross blog post. I researched statistics, read through the National American Red Cross' website for accurate information on the Public Health Education program, and spent hours pulling together my thoughts. I submitted my post, but didn't see it posted and didn't see it posted. Finally I emailed my contacts to make sure they knew my post was ready and that it was time sensitive - I wanted it to go up on or before December 1st. The news I received back was both shocking and sad - the National American Red Cross has eliminated the program. My contacts have promised to look into what happened and get back to me, so I won't speculate as to the "why" right now. In the meantime, I've decided to post my original Red Cross blog post - in its entirety, even though pieces of it are no longer relevant and/or accurate - here. It's still World AIDS Day, after all, and three of my four suggestions on commemorating WAD are still applicable.

The mission of the Red Cross is to help people prevent, prepare for, and respond to emergencies. An emergency, as defined by my good friend dictionary.com, is “a sudden, urgent occurrence requiring immediate action” and/or “a state of need for help or relief, created by some expected event”. Nowhere does dictionary.com limit emergencies to fires, floods, and tornadoes, which is why the American Red Cross Public Health Education (PHE) division develops, evaluates, implements, and supports innovative programs designed to prevent, prepare for, and respond to health-related emergencies.

Between 1981 and 2007 AIDS killed more than 25 million people worldwide, making it one of the most destructive epidemics in recorded history. (source) The American Red Cross recognizes the severity of this situation – a local, national, and international health emergency – and through PHE “educates people on how to stop the transmission of HIV, encourages people to respond in informed ways to people who have HIV, and helps people apply the facts about HIV to their own behavior”.

HIV/AIDS is in many ways the disease of my generation – I was just a toddler when our society first learned of its existence, and sadly, I have never known a world in which HIV/AIDS wasn’t a killer. I take HIV/AIDS awareness, education, and prevention very seriously, and am therefore extraordinarily appreciative of the work the Red Cross does on these fronts.

My support of the cause became even stronger a few years ago, when, after a co-worker and I proposed working with a local university Red Cross Club on an HIV/AIDS education program, another individual told us our efforts were “a waste of time because there was no HIV or AIDS in Michigan”. This of course could not be further from the truth, and her ignorance ignited a fire in me.

I bring all this up because this Thursday, December 1st is World AIDS Day (WAD).

WAD, an annual day of awareness and remembrance, was conceived in 1987 but held for the first time in 1988. Interestingly, the date of December 1st was selected primarily because it fell during a slow news period (after the 1988 presidential election and before the holiday season) and organizers believed it would maximize the media coverage given to the inaugural day.

There is no “right” way to commemorate WAD, but here are a few suggestions to consider this Thursday:

- Increase awareness. Talk about WAD with your friends, post about it on Facebook or Twitter, or write about it on your own blog. Awareness is half the battle.
- Remember. In honor of those who’ve lost their battles with AIDS, wear a red ribbon on your shirt or jacket or attend a memorial ceremony or candlelight vigil.
- Educate yourself. Attend a presentation or panel discussion to learn more about prevention.
- Educate others. Contact your local Red Cross to find out if opportunities to share information about HIV/AIDS prevention are available in your area.

The theme for WAD 2011 is “Getting to Zero”, meaning zero new infections. Thanks to the Red Cross, our country and our world are moving in that direction.

While I am heart-broken over the elimination of the American Red Cross HIV/AIDS program, I am grateful that it existed at all. There is no doubt the program reached (at a minimum) thousands of people and changed their lives for the better.
Posted by Chasing Roots at 10:00 AM