The 2011 Student Bonfire (which I wrote briefly about a couple of weeks ago) was scheduled to burn on November 22nd. Because of the severe drought, the state has been under a burn ban for months and it was decided - by Bonfire leadership - that bonfire would not burn this year. According to the Student Bonfire website, "...under no circumstances will Student Bonfire act against a burn ban. For the safety of our surrounding community and the future of the Bonfire Tradition, we must and will exercise discipline and demonstrate sound leadership, just two of the things the Bonfire experience provides in abundance every year to generations of Aggies". These "kids" sound a lot more mature than many of the adults I know...

I was disappointed though, because I had planned to attend Burn Night 2011. Once I learned of the decision to not burn the stack, I decided I'd make my trek out to Bonfire's location earlier in the day, while the kids were at school, rather than late in the evening when I'd rather be enjoying a glass of wine and emptying the queue on our DVR.

It took me close to 30 minutes to reach the site, which was in the next county and out in the country. The last mile of the drive took me past rundown and seemingly abandoned houses adorned with confederate flags and signs warning me to "keep out". Mangy dogs and goats roamed yards loosely defined by chain link fences so damaged they would neither keep me out or the dogs and goats in. It was a lovely neighborhood.

When I pulled up I found the gates at the site's entrance locked and the site completely void of people. Since I couldn't get close to the stack how I'd planned, and because I wasn't going home without a picture after spending such a significant portion of my child-free morning in the car, I drove on and turned down the first side street/dirt path I came to so I could photograph the stack without having to do so standing on the shoulder of the busier road.

In hindsight, the shoulder of the busier road would have been the better choice. I ended up taking my pictures (while wearing a jean skirt and ballet flats) through a barbed wire fence while straddling a small runoff "stream" and with one of my shoulders dangerously close to an enormous thorn bush. Needless to say, I didn't focus much on photo composition - I pretty much just clicked away for about 30 seconds and then jumped back into my car before an escaped goat could come after me.

After taking photos, I sat quietly in my car for a few minutes and reflected on how it felt to be in the presence of something so historical, so steeped in tradition. I had expected to find the site bustling with excited college students, but instead found the stack standing alone. I had expected the energy surrounding the stack to electric and contagious, but instead found the atmosphere solemn and hallowed. Though the students who died tragically exactly 12 years earlier had not perished at that exact location or at the hands of that exact stack, the site - and the stack on it - may as well have been a burial ground. I said a prayer of peace for their souls and for their families, and drove away. 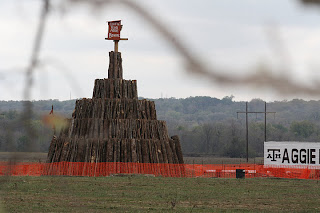 Bonfire 2011 was not the experience I'd expected, but was an experience none-the-less. Perhaps next year I'll actually see the fire.
Posted by Chasing Roots at 10:00 AM