Will, Hallie, and I were at the park, and after playing for a while on one structure, we decided to move across the park to a second structure. Will took off in the wrong direction, so I yelled, "Will! Come back here please!" in his general direction. I then bent down for a few - less than 10 - seconds to help Hallie with her shoes, and when I stood back up, a little boy around the age of 10 was standing directly in front of me. "Yes, Ma'am?" he asked, looking at me with wide eyes and a nervous smile. Very confused, I simply said hello to the little boy, who then noticed the puzzled look on my face and cleared things up by saying, "I'm Will".

So this little boy, who I'd never seen before in my life, took me seriously and respected my authority as an adult enough to break away from his basketball game and report front and center immediately when I called his name. Of course he probably thought I was a friend of his mom's (that's what I've become to ALL children now, a MOM), and was afraid that if he didn't listen to me I'd tell on him, but the point is that he listened and responded respectfully.

Of course I apologized to the little boy, and explained that I was calling the crazy five-year-old running away from me. 10-year-old Will smiled and returned to his basketball game, unphased by the encounter. I stood there, somewhat befuddled, until Hallie yanked on my hand and pulled me toward the playground.

A few weeks later, at the same park, Will pulled out his two Star Wars light sabers and asked me to sword fight with him. My sword fighting time limit is about three minutes, so after a few minutes had passed I told Will I needed to take a break. (For the record, at the three-minute mark I'm not tired FROM sword fighting. I'm just tired OF sword fighting.) Instead of melting down, like he usually does, Will approached another boy - who was about 11- or 12-years-old - and asked him if he'd ever seen Star Wars. I didn't hear the boy's answer, but I'm guessing it must have been something like "OhMyGoshILoveStarWars" because within a minute or two, Will and his new friend were engaged in an epic sword battle.

After about 10 minutes I felt the need to offer the older boy an "out" and told him he didn't need to sword fight with Will anymore. He responded with a sincere, "It's alright, Ma'am - I'm having a good time and he's a fun little boy". I thought Will's head just might explode with joy and admiration.

The boys continued sword fighting for another 15 minutes or so, until we had to head home. Before leaving I had an actual conversation with the older boy that began with him actually introducing himself to me (what?!), thanking me for letting him play with Will, and telling Will he hoped they would run into each other at the park again in the future. At this point Will's head actually exploded.

We did run into the older boy - whose name is Jacob, by the way - the following week. Jacob remembered Will (as if Will would have let Jacob forget him) and they sword fought again. At this point I was REALLY digging Jacob for taking over my place in the sword fight, and I was thinking about asking him if he wanted to come and live with us until I realized that you don't joke about things like that with kids. Might get myself arrested.

After a few minutes of sword fighting, Jacob walked up to me and apologized, saying that he really needed to work on his homework and therefore would have to stop playing with Will. He then proceeded to ACTUALLY WORK ON HIS HOMEWORK at the picnic table for at least 30 minutes, which was when we left to walk home. Seriously, I need to call that Jacob's mom and find out how she raised such an awesome 12-year-old.


One of the things I was nervous about when we made the decision to move to Texas was the conservative nature of the community. I'm not referring to politics (though College Station is without a doubt the most politically conservative city in which I've lived), but instead to the more formal and traditional relationships between husbands and wives and between adults and children. For some reason I felt uncomfortable with my kids being "required" to use "yes, sir" and "no, ma'am" when speaking to their elders. Don't get me wrong, I will settle for nothing less than respectful children. But I didn't feel comfortable forcing Will and Hallie to speak in a way that, while culturally acceptable and encouraged here, felt so strange to me.


They look like respectful children, right?
At least they do from behind. 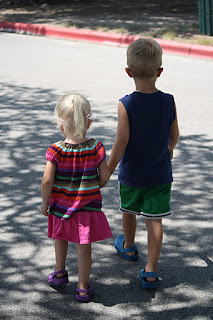 And then we actually moved here. Both Tom and I noticed almost immediately that College Station's young people, especially those in their teen years and young adults, are noticeably and collectively more respectful than the young people I've encountered elsewhere. The stories above are just two examples; I have at least 10 additional and similar stories that support this claim as well.

I also discovered, after a few months, that "yes, sir" and "no, ma'am" didn't make me feel as uncomfortable as I thought they would. So while I'm not requiring my kids to use "sir" and "ma'am", I AM asking them for a level of respectfulness when communicating with adults - including me - that I might not have asked for if we hadn't moved here and been exposed to something new and different.

Pulling all this together, I can't help but wonder if there's a correlation between teaching young children this style of communication and the level of respectfulness many older children and young adults here seem to have for their peers and elders. And while I don't know if such a correlation exists, I'm going to work on the "yes, mama" and "no, daddy" at home in hopes that someday my Will and Hallie are as respectful as 10-year-old Will and sword fighting Jacob.
Posted by Chasing Roots at 10:00 AM