In staying with my Iowa City-theme, I'd like to share a story about my and my mom's first trip to Iowa City. But first, a little background information...

In Madison (and elsewhere in Wisconsin and the Upper Peninsula of Michigan), Automated Teller Machines (ATMs) are called TYME Machines. TYME is pronounced "time" and stands for Take Your Money Everywhere. 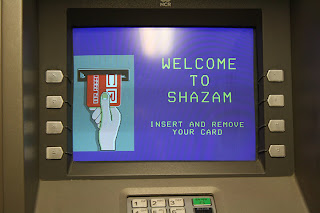 In Iowa City (and perhaps elsewhere in Iowa and beyond - I'm not really sure), ATMs are called Shazams. "Shazam" is kind of an odd name for an ATM to begin with, but the whole money retrieval thing gets even more confusing when you take into account that the word can be used as a verb or a noun, as in "I need to Shazam before we go out to dinner" or "Have you seen a Shazam in the mall?".

When we first arrived in Iowa City - having never been there before - for a campus tour, we decided we needed a little cash for shopping and dining. The following conversation ensued between my mom and a young male college student as we attempted to take the next step in the process:

While I was in Iowa City I made sure to Shazam once, not because I actually needed cash, but because it just seemed like something I should do. Thanks for the memories, Mom!
Posted by Chasing Roots at 10:00 AM