Everyone has a favorite season. Most people I've asked enjoy summer above all others, but spring came in a close second. Finishing a distant third was fall, and an even more distant fourth/last was winter. (My informal poll involved questioning those I see on a regular basis why they live in this sauna of a state...I'm willing to admit my results MAY be a bit biased.)

My favorite season, without question, is fall, for a whole slew of reasons:

- College and professional football and tailgating. Especially when my teams are winning. (Which my Green Bay Packers are, and my Hawkeyes are not, at least not enough to satisfy me.)

- New and old-but-returning-with-new-episodes television shows. From the moment season finales wrap in May I start counting down the days until my "friends" return in the fall. Unfortunately I have pretty bad taste in television shows and many I come to enjoy one year don't return the next. Flash Forward and The Event are recent examples - I lie awake at night wondering how these shows would have ended.

- Caramel Apple Spices. Starbucks actually makes this drink year-round (though it used to be a fall-only special), but I only allow myself to indulge in its thick, rich deliciousness in October, November, and December. And sometimes January. 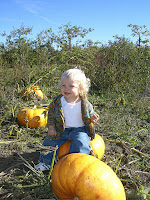 - Pumpkins. I love decorating with and carving pumpkins, but I love devouring all things made with pumpkin - bread, muffins, cake, Dairy Queen Blizzards - even more. The pumpkin shortage of 2010 (what's that you say? You didn't know there was a pumpkin shortage last year? I assure you, there was - not a can could be found in grocery stores across the country) was rough on me, and I plan to make up for the lack of pumpkin baked goods in 2010 by baking up a pumpkin storm this holiday season. 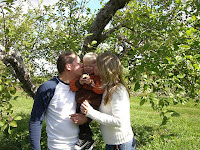 - Apple picking. Our favorite apple orchard in Michigan was a bit of a cliche, but in a good way. It offered everything you'd expect and hope to find at an apple orchard: apple trees of course, but also a pumpkin patch, berry patches, and warm apple cider and (the most amazing) donuts for sale. The orchard wasn't commercialized like so many these days, but was instead simple and organic. 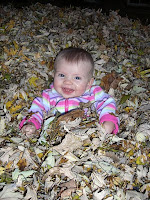 - The colors. Recent trips to Iowa and Illinois reminded me what Texas is missing, at least color-wise, during the fall season. The fiery red, brilliant orange, and warm, golden yellow leaves that define fall in the Midwest were everywhere I looked, and their beauty brought tears to my eyes.

- Halloween. If I didn't already love Halloween for its cupcakes, candy, and costumes, I'd certainly love it now, after trick-or-treating with my kids and listening to Will yell, "THIS IS JUST SO MUCH FUN!!!!!" over and over and over again for nearly an hour.


- Chicago. Every fall for the last 10 years my mom, sister, and I have met in Chicago for a girls' weekend of shopping, sight-seeing, and shows. I look forward to this weekend away all year, and I always return home feeling more connected to my mom and sister and rejuvenated as a wife and mother. 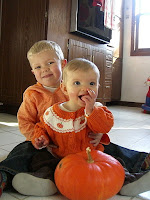 - Thanksgiving. When I was younger I wasn't a big fan of Thanksgiving. Every seven or so years my birthday and Thanksgiving fall on the same day, and as a child I couldn't stand having to share my special day with everyone else. Now I love when Thanksgiving and my birthday overlap - Tom and I don't have to work and the kids don't have school so we're all on vacation, and we usually spend the weekend with one side of our extended families. Not to mention the football games and pumpkin baked-good eating that goes on.

- Christmas festivities. Some people find the red and green twinkly lights and sparkly decorations; continuously-streaming Christmas music; and frantic, last-minute shoppers a little on the annoying side. I, however, love the excitement and anticipation leading up to Christmas. I'm cheesy like that; I truly believe that Disney World is the "Happiest Place on Earth" and the Christmas season is the "Most Wonderful Time of the Year".

- And last but not least, the cool, crisp fall weather. Oh how I miss you, sweaters and jeans. I long to slide Smart Wool socks on over my cold feet and cuddle on the couch in my fuzzy bathrobe. I wish we could play outside all afternoon (without sweating), and then enjoy a cup of hot apple cider in front of a roaring fire while a cool-turned-cold night wind rattles the windows. But alas, these things are not to be. As I type I'm wearing shorts and a tank top, having spent the morning sweating at the park with Tom and the kids. Our air conditioning is running, and will have to run through the night. Oh, and I gave most of my sweaters to my sister, who lives in Illinois; packed up my Smart Wool socks for our next garage sale; and traded in my fuzzy bathrobe for a lightweight one.

Even though it's technically fall - and we're watching football; enjoying new television shows; decorating and baking with pumpkins; celebrating Will's birthday, Halloween, my birthday, and Thanksgiving; and getting ready for Christmas - it just doesn't FEEL like fall without the cool weather and changing scenery. Those of you who've transplanted from the Midwest (or anywhere that has an actual fall season) to a warmer location, does it ever get easier?
Posted by Chasing Roots at 10:00 AM