After such a memorable Friday night experience at the Consolidated vs. Bryan high school football game, we decided another Friday night out was on the cards. This time though, we went to the TAMU vs. Drake University (which is in the great state of Iowa, incidentally) women's soccer game.

I grew up attending the University of Wisconsin women's soccer games. I knew many of the UW players and coaches from soccer camps I attended and many of the fans from my own club and high school soccer teams. Most of the fans were, like me, young girls who loved soccer and needed to see the sport played at a higher level in order to dream of playing at that level themselves. (I decided not to play soccer in college, mainly because I wanted to go to a larger - Division 1 - school, and the only schools that pursued and/or offered me money to play were Division 2 and 3.)

The best part about attending these soccer games was that I almost always went with my dad. Even when we didn't sit together (there were times my sister and I would run off with our friends and my dad would sit with other parents and his soccer fan friends), we were THERE together. It was our "thing", and still is, whenever we can make it happen.

The TAMU game was a little different than the games we attended at UW. The TAMU women's soccer facilities - which include stadium seating, a press box, a huge and informative scoreboard, a gigantic screen on which live action and replays are shown, actual bathrooms, and a concessions building - are brand new and top-of-the-line, at least as far as women's soccer is concerned. (The UW facilities, if you can even call them facilities, are anything but new and top-of-the-line - the team has an acceptable field but nothing else.)


A view of the field, the stadium seating, and Will's friend Ian's dad.  (Ian's dad, Coach Paul, helps out with Will and Ian's soccer team and is also the strength and conditioning coach for the Aggie women.  He's wearing a black shirt and khaki shorts and standing on the sideline.) 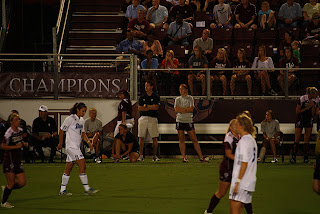 The stadium has lights for night games. 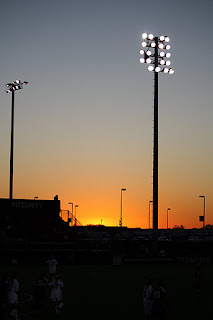 The fancy scoreboard just as the Aggies scored their second goal. 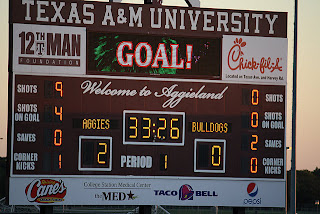 The fans are enthusiastic and knowledgeable, and they come out in droves to support their Aggie Women - there were 4,300 people in attendance that Friday night. (I remember crowds of a couple hundred back when I attended UW games and my dad says the numbers haven't risen much since then.)

The Yell Leaders attended the game and led the fans through 25+ cheers and songs throughout the game. (I don't recall ever seeing a cheerleader at a UW women's soccer game.) 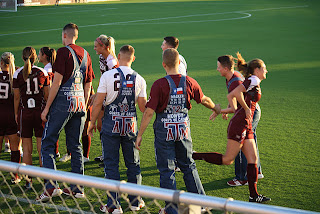 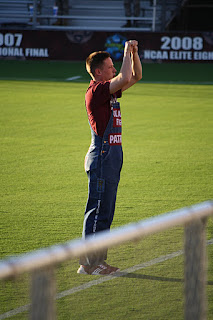 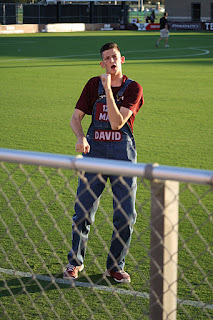 The Drum Line played nearly every minute that the Yell Leaders weren't leading cheers, which I at first thought would be kind of annoying but actually ended up being pretty cool. 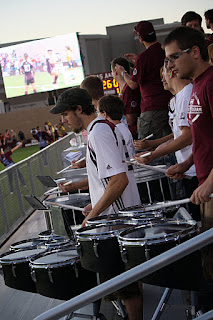 Incredibly, all four of us made it through the entire game - that's 30 minutes of pre-game, 90 minutes of soccer, and a 20-minute half time for a total of 140 minutes spent at a sporting event. Being close to the field, lots of action on the field, good concessions, real bathrooms, and great October evening weather combined for a fabulous night out. 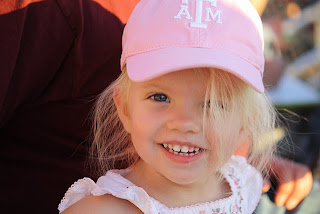 Proof I was at the game!  (There are rarely any pictures of me.
It's a shame the one picture of me that night isn't a very good one.) 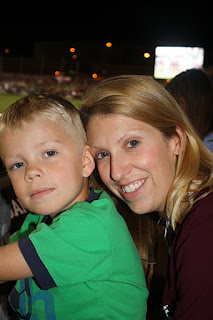 The only proof I have that Tom was at the game is this picture of his
Strawberry-Shortcake-Bandaid-wearing arm. That's right, people, he rocks
Strawberry Shortcake Band-aids. They smell delicious. 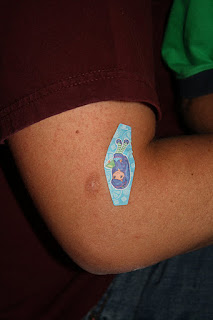 Friday nights are quickly becoming my favorite part of the week. 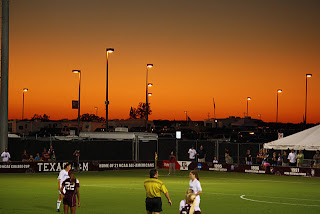