Tradition: Let's Get Our Yell On!

Unlike nearly every other University in the United States, Texas A&M does not have a cheerleading squad. Why, you might ask? Because Aggies don’t cheer. Aggies yell, and are led in their efforts by Yell Leaders.

The original yell leaders (dating back to the very early 1900’s) were freshman who, having been instructed by upperclassmen to entertain fans during a football game, donned white janitor uniforms, led the crowd in yells, and told jokes from the track in front of the stands. These charismatic freshmen became so popular with the student body and their female guests (TAMU was still an all-male military school at the time) that the upperclassmen decided to take the privilege of energizing fans for themselves.

Today’s team of five Yell Leaders includes three seniors and two juniors, all elected annually by popular vote of the student body. (TAMU is one of very few schools in the country that elect its spirit leaders, and it’s not uncommon for twice as many students to vote in the Yell Leader election than vote in the Student Body President election.) More often than not, Yell Leaders are Cadets, though membership in the Corps is not required. And while women have campaigned for Yell Leader positions, none have ever been elected. 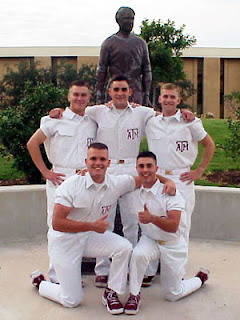 Fun fact: Texas Governor and presidential hopeful Rick Perry was a TAMU Yell Leader!
That's him on the right. 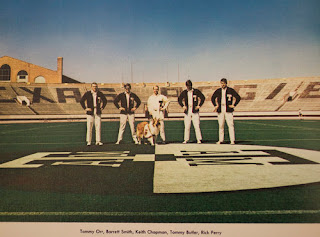 Yell Leaders, along with Juniors and Seniors in the Fightin’ Texas Aggie Band and Seniors in the Fightin’ Texas Aggie Singing Cadets, are the only TAMU students who receive varsity letters without playing a sport. (I suppose I’m alright with this, because these students train and compete and perform like athletes, but it brings up a topic I’ll likely discuss down the road…when did varsity letters for high school students become the equivalent to participation trophies for five-year-old soccer players?! Why should a student who was loosely affiliated with the French club earn the same prestigious award as a student who spent four years training and competing as a member of the varsity basketball team? They shouldn’t. But I digress.)


A pass-back signal made by the Yell Leaders is “passed back” through the crowd until word has spread and everyone knows which yell will be performed. 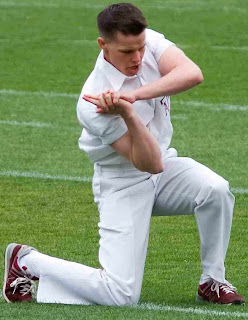 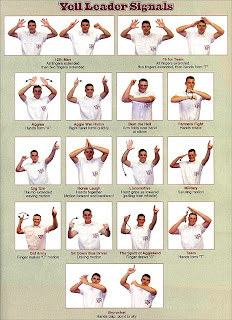 Once the signal is made and passed back, Yell Leaders signal for the crowd to “hump it” and begin the yell.


Humpin' it, or leaning forward with hands resting above the knees, aligns the back, neck, and throat in a position that maximizes noise. 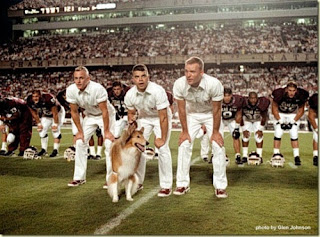 After Aggie defeats, fans remain in the stands for a short yell practice. I liken this practice to athletes running wind sprints after losing a game – the coach doesn’t think the players worked as hard as they could have on the field, so he/she makes them pay for it after the final whistle. Perhaps a short yell practice after a losing game is the coach’s (the Yell Leaders) way of letting the players (the Aggie fans) know they'd better step it up for the next game…

After Aggie victories, Corps of Cadet members chase and catch the Yell Leaders and then throw them in a fountain of very cold water called Fish Pond. (Seeing as I spend most of my days wishing someone would throw me into a fountain of very cold water, I think being a Yell Leader on game day sounds like a pretty good gig.) Aggie fans follow the band out of the stadium and to the YMCA, where they’re joined by the soaking wet Yell Leaders, for a short rally.

I'd love to see my kids, 14-16 years from now and if sports don't work out for them, skip cheerleading (I don't think this will be problem for Will, but you never know about Little Miss Bossy Pants) and campaign to become TAMU Yell Leaders. Heaven knows that if voice volume is even 50% of what the student body considers when electing their Yell Leaders, Will and Hallie are shoe-ins.
Posted by Chasing Roots at 10:00 AM