A couple of week's ago my friend Leslie posted on her blog about taking her three kids to the skate park in Davenport, IA. Seeing her post reminded me that I had intended to write and post pictures about our recent trip to the brand new skate park here in College Station, so here's that post, a few weeks late!

When we were in our tween years, my sister and I expressed to our parents an interest in skateboarding. Within a week or so of us starting to talk about the sport, two skateboards appeared in our garage. These weren't your run-of-the-mill Target skateboards; these were rickity, unsanded wooden skateboards on wheels that had already been rolling for AT LEAST 40 years. (I bet you thought I was going to say my parents bought us top of the line, professional skateboards. Fooled you!)

We quickly discovered that skateboarding regularly (standing up) wasn't an option on these boards because their elderly wheels would catch and launch us forward forward onto the pavement. Next we tried sitting on the boards and rolling down the hills in our neighborhood, but after a splinter or two in the rear we abandoned the boards all together and never went back to skateboarding.

I'm willing to bet this was my clever mom's plan all along, and I may someday borrow a page from her playbook because the idea of watching my kids take on this seemingly dangerous sport is anything but comforting.

That being said, and because my son is moderately interested in skate boarding and we've been watching the new skate park being built all summer, we thought it might be interesting to just check out the grand opening of the park.

Here's a glimpse into the action:


Crazy jumps (he landed this one) 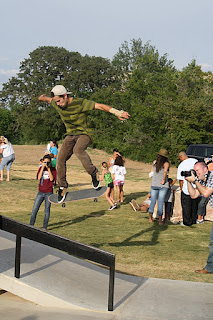 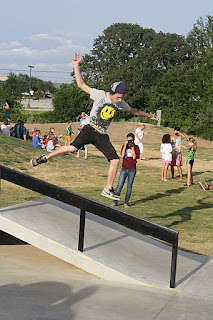 Will was especially impressed with the bikers 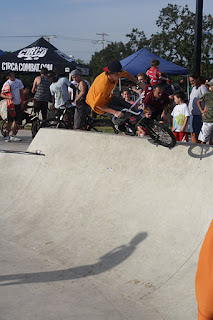 I was especially impressed with this fellow, who, with a prosthetic leg, skated as well as anyone else 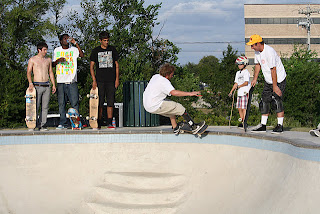 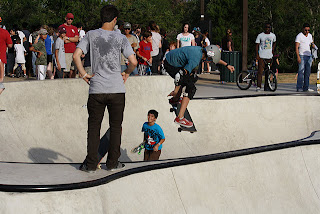 The crowd (you can see the tops of the cement basins) 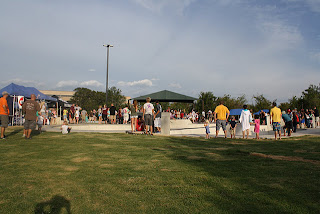 I've never seen so many pairs of skinny jeans or Vans in one place in all my life, people.

But in all seriousness, the skate park grand opening delivered.  The park itself is impressive.  The skateboarders and bicyclists showing off their skills on the ramps and jumps were incredible.  And there were hundreds of people of all ages - families with young children, tweens and teens, college students, young professionals - at the grand opening to show support for this new addition to our city.

While I don't think I'll ever become a skateboarder (I actually have terrible balance, so even if I'd had a run-of-the-mill Target skateboard back in the day I don't think I'd have stuck with the sport for more than a week), I applaud the city for building something for which there was obviously a need and that encourages kids to stay active and away from the scary temptations of adolescence.

The one negative is that not a lot of skateboarders and bike riders were wearing helmets.  Not to worry though, because Will, otherwise known as the "helmet police", shouldered the burden of making sure these people knew the error of their ways.  He reprimanded at least three or four helmet-less boarders/riders with a stern, "Hey YOU!  You're not wearing a helmet!  You should be wearing a helmet!"  He of course made a good point, but it was tough to take him seriously in his Burger King crown. 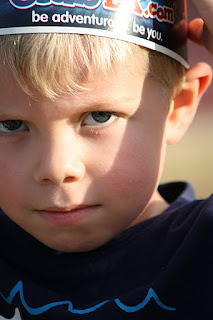