Texas A&M University has been a member of the Big 12 Athletic Conference since the Conference was created in 1996. In August, TAMU announced its plans to leave the Big 12. In September, the SEC Athletic Conference voted to accept TAMU as its 13th member, with one condition...the remaining Big 12 schools would be required to affirm for the SEC that they would not pursue legal action to block the move. Though many Big 12 schools agreed, Baylor threatened lawsuits. (I liken this behavior to that of a four-year-old who, angry that his friends won't play what he wants to play, takes his toys and goes home.)

A TAMU alumni, frustrated by this Baylor-instigated hold-up, reached out to other Aggies via the internet and quickly raised the $2,750 needed to put up this billboard. 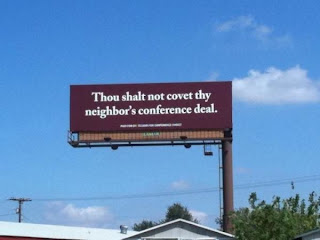 TAMU Aggies love it; Baylor Bulldogs are up in arms. Does the fact that I love it officially make me an Aggie?
Posted by Chasing Roots at 10:08 PM

Email ThisBlogThis!Share to TwitterShare to FacebookShare to Pinterest
Labels: TAMU