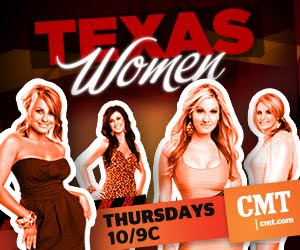 While searching through the TV guide I came across a listing for a relatively new show called “Texas Women”. As a woman living in Texas, I figured this show might be a good one for me to check out, and I set the DVR to record a couple of episodes. A few days later, while the kids were napping, I plopped myself down on the couch with a Coke Zero and hit “play” on the remote. I watched four minutes of programming, and then deleted the episode from the DVR queue. “Texas Women” was that awful.

According to Jayson Dinsmore, CMT’s Executive Vice President of Development, “Texas Women” is a “docu-soap reality show about ambitious, young, working women in Texas”. He goes on to describe the women as “kick ass”, and proudly claims that they “can fight like cats on a Saturday night, then wake up Sunday, apologize, and go to church together”. Give me a break.

So that I could share with you a more informed criticism, later in the week I struggled through two full hours of “Texas Women”. To the show’s credit, the four minutes of programming I initially watched were probably the four most disgusting minutes in the entire episode (four drunk women having a cat fight and then shamelessly picking up and possibly taking home men in a bar). That’s not to say the rest of the show was quality television though. As one Texas Woman bedazzled her rodeo barrels and another tried to figure out the meaning of the word “ambiance” so she could shop for Tiki Torch party decorations, I kept thinking about how the minutes I spent watching this garbage were minutes I would never get back.

From what I’ve seen, many Texans, both men and women, wear cowboy boots and hats. Women have bigger hair, wear bigger and more elaborate jewelry, and decorate their jeans and flip flops with more rhinestones than women in the Midwest. In these regards, “Texas Women” is fairly accurate. But I’ve yet to meet any women in Texas who are as extravagant, flamboyant, and obnoxious as the “Texas Women”. Thank goodness.

Note: Out of curiosity I read through quite a few of the online comments about “Texas Women”. The comments, especially those made by Texans, were overwhelmingly negative. Many REAL Texas women were incredibly offended that their state and gender were being portrayed so outrageously.

In my search for information about and viewer comments on Texas Women, I learned that there are (at least) five additional reality television programs currently on the air, in production, or in the planning stages that take place in Texas. Really?! Do people Texas have lifestyles worth documenting? I certainly don’t, but maybe that’s because I’m not actually from Texas.

If you’re interested, I’ve included below the names and brief descriptions of the other five Texas reality shows (if you only have time to read about one of the shows, skip to the end of the list for Survivor: Texas Style). Watch them if you’d like, but don’t plan on learning anything about 99% of the people who live in Texas. Better yet, pass on the reality television altogether and watch an old episode of Dallas.

Big, Rich Texas (commonly referred to “The Real Housewives of Dallas” on the interwebs)

“Follow this group of chic mothers and daughters for a sneak peak inside the exclusive world of Dallas’ elite – and entertaining – social scene.”

This Scott Jeffress (Jersey Shore producer) reality show is still in the casting stages, but will supposedly going to take place in affluent Texas suburbs.

“Giddy up Texas, time to show the rest of the country what getting REAL is all about!...When they say ‘Don’t Mess with Texas,’ they’re talking about you. Wherever you go, you make a name for yourself. You’ve always had the personality, the looks, the charm, and the style to stand out…Do you rule the bar scene, rope in the hottest of the hot, drink anyone under the table?...Is everything really bigger in Texas? Prove it. Time to go big, because going home isn’t an option.”

“When Dallas homeowners feels the need to pimp out their lavish houses, they count on Donna Moss to bring the bling. Along with her two daughters and fabulous find from the family-run boutique, Donna brings high-end design to the land of high drama that is the Big D.”

Most Eligible in Dallas

“They’re young, they’re hot, they’re single – they’re Dallas’ Most Eligible. From beauty queens to pro-football players, this group of Texas socialites proves that everything’s bigger in Texas – including the drama.”

“Eight contestants start in Dallas, then drive to Waco, Austin, San Antonio, Houston, and Brownsville. They will then proceed to Del Rio, El Paso, Odessa, Midland, Lubbock, and Amarillo. From there they will travel to Abilene, Fort Worth, and finally back to Dallas.

Each contestant will drive a pink Volvo with bumper stickers that read: 'I’m a Democrat', 'Amnesty for Illegals', 'I Love the Dixie Chicks', 'Boycott Beef', 'I Voted for Obama', 'George Strait Sucks', 'Hillary in 2012', and 'I’m Here to Confiscate Your Guns'.

The first contestant to make it back to Dallas alive wins. God Bless Texas!”

Email ThisBlogThis!Share to TwitterShare to FacebookShare to Pinterest
Labels: Down South