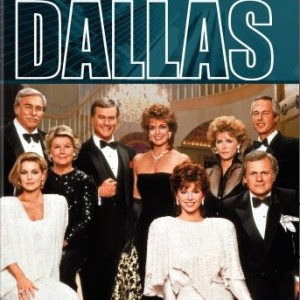 Remember Dallas? As in the mini-series turned long-running and extremely popular television series back in the late 70’s, 80’s, and early 90’s?

My parents watched Dallas every Friday night. They didn’t consider it appropriate for me and my sister (I was born in 1978 and my sister was born in 1981, so we were pretty young during the height of the show’s popularity), so we weren’t allowed to watch with them. But as kids will do, we found a way to absorb at least a little bit of that juicy drama…

After my sister, Sara, and I were tucked into bed, my parents would head to the family room to spend an hour with JR, Bobby, and Sue Ellen. After the French doors were closed and the television turned on, Sara and I would sneak out of our bedroom and station ourselves, sitting cross-legged in the dark, on the floor of the kitchen side of the French doors. Because of the step we could just barely see over our parents’ heads to the television. Score.

If ever my parents made a move to get up off the couch, say to pop popcorn or get a soda from the refrigerator, Sara and I would dash from our viewing area to the safety of the dining room until they’d returned to the couch. When the credits rolled we retired to our beds to discuss what we believed had transpired on that evening’s episode. We were usually pretty confused – not only were we watching without sound, but we were like nine and seven, and our experience with “adult drama” didn’t extend much farther than Mr. Hooper’s passing on Sesame Street.

What I took away from watching (and not listening to) the show Dallas was that the city of Dallas, Texas – along with the people who lived there and the lifestyle of these people – was bigger than life. Extravagant mansions and properties, exorbitant wealth and privilege, passionate love and bitter divorce. Bigger was better. (Oh, and everyone wore cowboy hats and cowboy boots.)

I have no doubt that Dallas-the-television-show shaped how I viewed Texas-the-state when I was a child. And how I viewed Texas as an adult, for that matter. Until I moved here, my reference points with regard to understanding the state of Texas included the television show Dallas, the movies Friday Night Lights and The Rookie, and a few choir tours in San Antonio. Thankfully I’m constantly increasing the number of reference points, which will eventually help me paint a clearer and more accurate picture of the state I now call home.

I found out a couple of years ago that Sara and my secret viewings of Dallas weren’t actually secret after all – our parents knew we were there, and chose to let us stay, probably because that was easier than getting up and putting us back to bed.

Tom and I talked today about how we would definitely do the same thing, especially if we were raising kids back in the 80’s, when pausing television shows wasn’t an option. Who am I kidding – we’d probably do the same thing now, even with the DVR.