Boots, Schmoots. I Have Something Better. Well, Maybe Not Better, But Equally Cool.

It’s not that I haven’t tried to buy boots. I mean, I’ve been to the boot store like 12 times.

Our first trip to the boot store (me, Tom, Will, Hallie, and Tom’s parents) was about the kids and their boots. Will moved quickly from one boot to the next, trying on at least 20 different styles and colors before he made his choice (which I expertly orchestrated ☺). Hallie, on the other hand, tried on one red boot, married it, and spent the rest of her time in the store riding a rocking horse. Unfortunately for me, once they had their own boots, neither child was interested in behaving long enough for me to even walk through the women’s boots section.

Our second, third, and fourth trips to the boot store (me, Will, and Hallie) all ended quickly, thanks to, in no particular order, a bathroom emergency, a tantrum, and a disgusting piece of already-been-chewed bubble gum stuck to the bottom of a shoe. It should be noted that I was not the one with the bathroom emergency, the one who had the tantrum, or the one who stepped in bubble gum.

Our fifth trip to the boot store (me, my mom, and Hallie) was overwhelming. For the first time I was actually able to walk through the women’s boot section of the store, and I found myself intimidated by the number of styles, colors, prices, sizes, and combinations they could make in a pair of boots. I was so intimidated that instead of shopping for boots, we shopped for dresses.

Our sixth trip to the boot store (me, Tom, Will, and Hallie) was to buy boot socks for Tom. We were in and out in less than five minutes because Will attacked Hallie with a toy Beebe gun, and then completely lost his mind when we wouldn’t buy the gun for him.

MY seventh and most recent trip to the boot store (All. By. Myself. Wheee!!) was once again overwhelming. Even with the singular purpose of buying boots for myself and without two kids in tow, I couldn’t choose between camel, dark brown, or red boots; between leather, snake, or ostrich material; between teal, pink, or orange stitching; between pointed, rounded, or square toe. Eventually I just plain gave up on boots – for the time being – and left the store, defeated.

When I was in Minocqua earlier this summer we visited a few antique stores. Hiding in the back of one of the shops was this purse, which my mother-in-law immediately exclaimed that I needed, because it looked like a Texas purse. 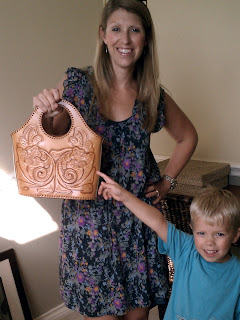 She was right – I did need this purse. It’s soft, worn leather exterior and hand-stitched design are a perfect substitute (albeit temporary) for the boots I couldn’t bring myself to buy.
Posted by Chasing Roots at 10:00 AM