I’ve mentioned the lizards. A couple of times. But living among the lizards are plenty of slightly-less-creepy animals, many of which I’ve been able to photograph up close, thanks to both my camera lens and these animals’ apparent indifference toward humans invading their natural habitats.

These ducks sauntered confidently up to both my husband and my car, expecting, I assume, that he had “people food” to share with them. 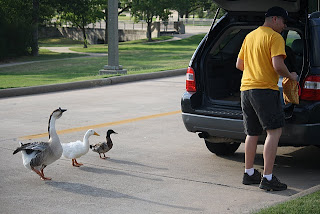 This rabbit sat quietly in the middle of my backyard – on Easter, coincidentally – while my kids played with their Easter-bunny-delivered bubble wands nearby. Since that day I’ve seen rabbits in our yard AT LEAST 20 times; I’m a bit worried about how we’ll protect our yet-to-be-planted vegetable garden from them. 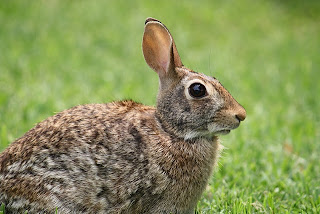 These turtles (and nearly 30 of their closest turtle friends) lazily sunned themselves on the rocks at the edge of the pond as my husband and son played disc golf over/around them. 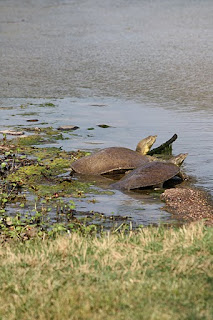 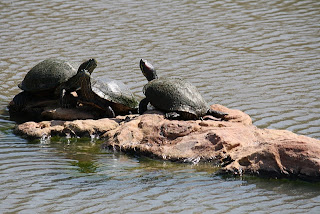 This frog or toad (I don’t now, nor will I ever, know the difference between the two), poor thing, was on his way to the water – about 10 feet beyond the edge of the sidewalk – before the brutal Texas sun torched him. He was literally petrified mid-hop. 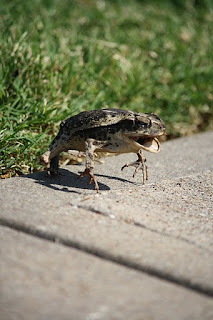 Of course I’d crossed paths with plenty of ducks and rabbits, as well as the occasional turtle and frog/toad, in the Midwest, but I’d never seen them so bold and seemingly unafraid of humans until I moved to Texas.

Now that I think about it, most of the animals here in Texas are bold and unafraid. (Or perhaps they just seem bold and unafraid to me, because I’m so timid and fearful when it comes to all animals besides your run-of-the-mill cats and dogs.) Though I’ve not taken pictures, I’ve also seen plum-sized cockroaches, red wasps (“red equals dead”, our pest inspector warned us), and fire ants in our house and yard, and two dead snakes in the street. There’s also a chance we have an “armadilla” digging a trench/living behind our shed, and because we’d rather not adopt an armadillo as a pet, we’re going to have to figure out a way to rid our yard of this wild animal. Suggestions?

Whatever the case, the encounter will undoubtedly be terrifying and should make for an interesting blog post down the road…
Posted by Chasing Roots at 10:00 AM