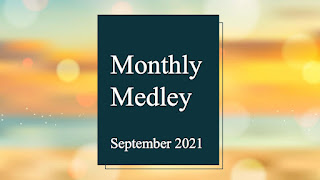 I have a short and sweet article - about semi-homemade holiday treats - in this month's issue of Texas Living magazine. It was my first attempt at this kind of piece (and my first attempt at taking photos for an article, which, it turns out, I am NOT good at), and while I was a little disappointed they had had to cut the content a bit for space, the article still looks and reads as I had intended. 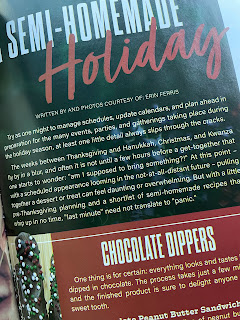 When I started One by One by Ruth Ware, I honestly thought I had accidentally picked up and begun to reread The Sanitorium, which I read in June. The settings for these two mysteries, as well as the foundations on which the plots are built, are all oddly similar. Additionally, both authors talk about funiculars (a cable system system which connects railway points along a steep slope), a word I'd never heard before and hadn't heard since I read The Sanitorium, right off the bat. Once the storylines started to diverge, I found myself better able to invest in One by One. I've enjoyed all of Ruth Ware's books, and this "one" is no exception! 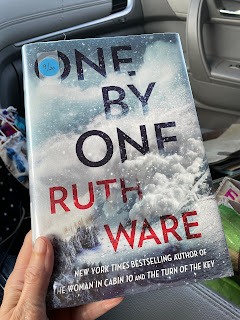 Tom and I started watching Nine Perfect Strangers, with Nicole Kidman and Melissa McCarthy (who is my absolute favorite), and while I'm not yet amazed, I am intrigued and we're both looking forward to seeing how this storyline plays out.

Tom, Will, and I watched the Hulu miniseries 11.22.63 and thoroughly enjoyed it. There are quite a few dark, disturbing, and even shocking twists and turns - such content is to be expected, given that the miniseries is based on the novel 11/22/63 by Stephen King - and that, along with the language, appropriately earned the miniseries its "M for Mature Audiences" rating. Will could handle just about everything (though he turned his head during a couple of grizzly scenes), but we kept Hallie far away and otherwise engaged while we watched. I read the book - the longest I'd ever attempted and finished - eight to 10 years ago, and it was really fun to revisit the story on the small screen. I highly recommend both versions!

Last but not least, Hallie and I added the classics The Cutting Edge and Mamma Mia to our Corona RomComs list!

I'm still not listening to a lot of music, but I'm keeping up on my podcasts. Since I haven't started any new podcasts this month, I thought I'd share a recap of what I listen to regularly:

I'm also looking forward to the new seasons of Under the Influence with Jo Piazza and Up and Vanished.

This month all of my new "follows" have been clubs, groups, and pages associated with Will's high school. He doesn't have social media yet, so I see it as my responsibility to follow along on Instagram as these entities post about dress up days, sporting events, musical performances, registration deadlines, and PTO meetings...despite the fact that he cares very little about all of these things. All that to say, unless you need recommendations on what to follow to stay connected at Consol, this month this category is a bit of a wash. 😂

If you're in the market for new throw pillows, especially seasonal pillows that you won't have out for an extended period of time and therefore don't need to be made to withstand 365 days of lounging, spills, kittens, check out TJ Maxx, HomeGoods, Marshalls. All of this year's Halloween pillows came from these three stores, and I've also recently added some soft, neutral colored pillows from At Home as well. You can see all of my Halloween throw pillows in this post.

I bought new Halloween throw pillows from Amazon last year, but they ended up being cheaply made and not nearly as cute as I'd hoped they would look in person. Boo.

College Station recently gained a fun bath and beauty shop called Buff City Soap. Their plant-based products are homemade daily without harsh chemicals, without animal fats, and are cruelty free. A friend was one of the store's first shoppers on opening day scored multiple free soaps each month for a year, and she gifted one of her September bars to me. It's pumpkin spice latte, and it both smells lovely in my shower and feels amazing on my skin. I can't believe I haven't been in the store myself yet, but Hallie and I will definitely pop in this month! 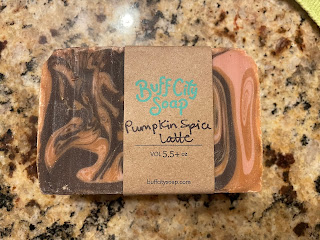 This summer I bought a pair of bootcut/flare jeans because they fit exceptionally well, rang up at a great price, and are supposedly back in style. The thing is, though I want so badly to love this style of denim - after all, I remember loving this style of denim just 20 short years ago - I just...DON'T. If wearing skinny jeans is wrong, I don't want to be right.

And while we're on the subject (or in the neighborhood of the subject), don't mess with my side part either.

I actually managed to try a couple of new recipes this month, but both scored only average grades so they're not really worth sharing here. What are worth sharing here, however? These cookies. Mother's Halloween Circus Animal Cookies are somehow even better than the original pink and white version! 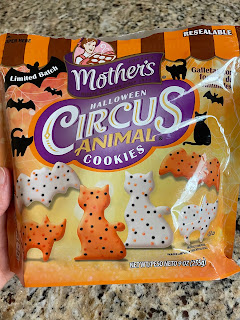 Time to start enjoying all things fall - bring on October!
Posted by Chasing Roots at 5:00 AM