This month I devoured The Sanitorium by Sarah Pearse. I admit to being drawn initially to the cover, but thankfully, the story beyond the cover didn't disappoint. Because I don't want to spoil anything, I won't say much about this suspenseful mystery other than that there are lots of twists and turns, and an ending I definitely wasn't expecting. 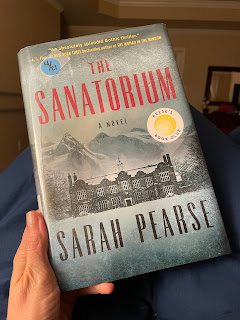 I had high hopes for a second book in June, but as I started three and finished none, I think it's time I accept that two-book months just aren't in the cards for me...

On the television front, Will and I finished Lie to Me and on the recommendation of a friend, moved on to Psych, which I would describe as a lighter, funnier combination of Lie to Me and The Mentalist. The kids and I have also started our annual watching of AGT, though we're already pretty far behind and I don't know if we'll catch up in time to vote in the live episodes. Following shows like AGT was easier when the kids didn't have evening activities during the summer...

Also in TV Land, Hallie and I are struggling to find a new sitcom to watch. We loved Friends, Full House, Fuller House, One Day at a Time, Liv and Maddie, Alexa and Katie, and Man with a Plan. We've watched some/all of Jessie, Bunk'd, No Good Nick, Boy Meets World, and Family Matters, but we didn't like any of them as much as those listed in the first sentence. I want to watch The Bill Engvall Show and Growing Pains with her, but both aren't free, and I don't really want to buy episodes or seasons. Any recommendations for us?

On the movie front, Hallie and I watched the oldie Camp Nowhere as well as the Netflix new release, The Mitchells vs. the Machines. Both were fun and entertaining, though Mitchells/Machines had a little more action and excitement going on.

After hearing it advertised on the radio multiple times, I subscribed to the podcast Missing on 9/11, about a woman who went missing on September 10, 2001, less than 24 hours before terrorist attacks shook the nation. While this wasn't the fastest moving or most intriguing podcast I've ever listened to, it kept me mostly engaged while walking. It also pointed me toward another podcast by the same team, Missing in Alaska, which I plan to try while on the road this summer. 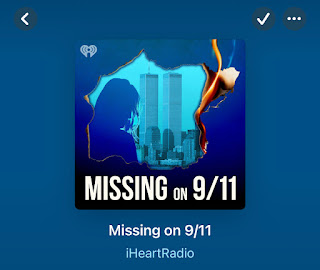 Speaking of road tripping...any suggestions for podcasts to listen to while we're in the car? Will and I both like true crime, though what I'll let him listen to differs from what I'll listen to when I'm alone (think Criminal vs. Crime Junkies).

My favorite follow this month is Kitten Lady on Facebook. She's an expert on kitten care, and has written books, created online seminars, and filmed hundreds of YouTube videos to help guide new and seasoned kitten fosters and owners through raising their own kitten babies. In particular, I've loved following along as she's been working tirelessly (and I mean TIRELESSLY) to save the life of a sickly little babe named Ferguson. For a glimpse into what Kitten Lady is all about, check out this post about Ferguson's eight-week-old birthday party - when your survival is not at all guaranteed, you deserve an eight-week-old birthday party - and this post (with a link to a YouTube video) about the seemingly increasing number of kittens being born with medical conditions like Pectus Excavatum (which our sweet Mohawk was born with and for which he underwent surgery this month).

At the recommendation of a friend, I tried Garnier Green Labs Brightening Serum Cream. I LOVE my Pure Haven Essentials lotion, but it doesn't contain SPF so it isn't the best option for a morning face lotion...in Texas...in the summer. This product does contain SPF, and it goes on smoothly, feels light on my skin, and has a simple and pleasant scent. I plan to stick with it through the summer (which, here, lasts through the end of October), and may continue using it after that if I see positive results! 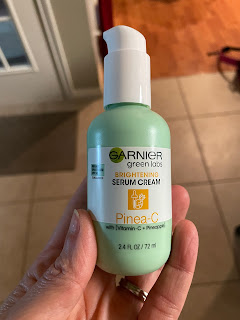 Sherry of Young House Love highly recommends Folex for cleaning fabric - think furniture, carseats, etc. - and while I didn't quite believe the hype, I bought a bottle on Amazon. And by golly, if she wasn't right. I forgot to take before/after pictures, but trust me when I tell you that it did a better job of cleaning up spots and stains than anything I've ever used before.

I've written previously about my favorite Athleta shorts, but new colors were recently released so they're worth mentioning again. This one is *chef's kiss*: 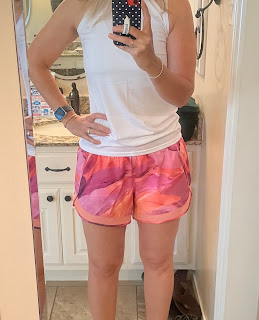 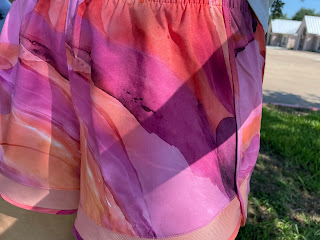 At my color session a few weeks ago, I learned that "plum" (because it falls in the cool and bright palette and because winters should wear a pop of color) would be a good lipstick option for me. I stumbled upon this Burt's Bees Lip Shimmer in plum, and I love it - it's the right color, at the right price point, and it's also extremely hydrating. I'd love to purchase a second color, but I can't seem to figure out which other shades might fall into the cool and bright category...I'm not very good at identifying my best colors yet! 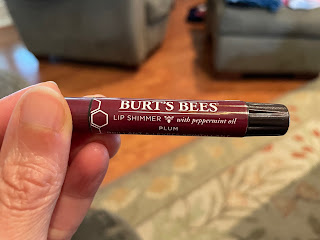 After many years of considering Home Chef and then deciding against it, over and over and over again, in June we finally gave it a whirl. We've received two shipments and tried four recipes so far, so while I'm no expert, I've seen and tasted enough to make an honest assessment.  Positives: tasty food and decent serving sizes. Negatives: lots of shipping/packing waste (some but not all things can be recycled) and more assembly than expected, even for the "easy" recipes. Overall I'm happy, and I think we'll continue receiving a couple of meals every two weeks come August, when everyone goes back to school and we need a little extra help with meal planning!

I'm not in any way sponsored by Home Chef, so I don't have a huge discount code to share like many of the influencers who are currently talking about Home Chef. I do, however, have a referral code, so if you're interested in giving Home Chef a try, feel free to use mine (ERINF660) and we'll both get a small discount. 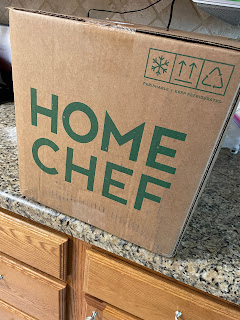 On the beverage side of the coin, this month friends and I tried - and enjoyed tremendously - Wine Cube's Bubbles Sparkling White Wine (in a can). I like how the box is labeled with the wine's sweetness level, and the cans are the perfect size for a summer beverage. (I think all summer beverages should come in slightly smaller cans so that you can drink the entire beverages before it gets too hot.) 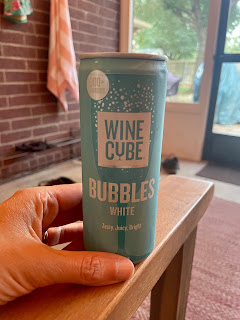 Cheers to summer, friends!
Posted by Chasing Roots at 5:00 AM