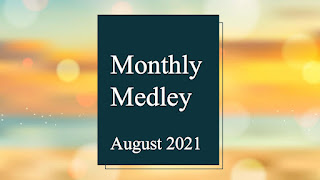 I read about 50 pages of a great book during the first week in August, and then I set the book down and never picked it up again. Such is August... I hope to return with at least one book recommendation next month!

When we watch television or movies at home, we often split into two groups (though the make-up of these two groups varies) because it's incredibly difficult to find something we all four enjoy. Tom and the kids love cartoons, I don't. Hallie and I love Friends and romantic comedies, the boys don't. Tom and Will like superhero movies and disc golf tournaments, Hallie and I don't. Will and I like caper/heist/crime dramas, Tom and Hallie don't. You get it. When we were in Madison, while looking for something all four of us AND my parents would like - a nearly impossible task, wouldn't you agree? - we stumbled upon The Mysterious Benedict Society. Oh my goodness, we all LOVED this show (season one included eight episodes and was based on book one of the series) and are crossing our fingers that a second season will soon be in the works. The writing is fantastic, the cast is perfection...this is without a doubt one of the best shows - smart, clever, engaging, entertaining, funny, fun, and yes, mysterious - I've watched in years. And it's perfect for kids, tweens, teens, boys, girls, moms, dads, grandmas, and grandpas.

Hallie and I also enjoyed both Kindergarten Cop and The Wedding Planner from our Corona RomComs list and we started watching the sitcom Reba while we wait for The Bill Engvall Show and Growing Pains to stream somewhere for free...

Nothing. Better put, I'm listening to silence. After a lifetime of listening to music and at least a few years of riding along on the podcast bandwagon, I noticed a few weeks ago that I'm more and more frequently sitting and walking and driving and working in relative quiet. At first I thought it was because I needed less noise - after all, the last 18 months have been incredibly loud, what with all the people and all the kittens in the house all the time. But after delving into this development, I realized that the quiet is about something else entirely. And while I hate to leave you hanging, I'm going to do just that because I have an entire post on the subject coming soon. 'Til then...

I've been enjoying Galey Alix (@galeyalix), who works in finance Monday through Friday but on the weekends works as a designer and videographer. She comes across as honest and real, her designs are beautiful, and her reveal videos are *chef's kiss*. 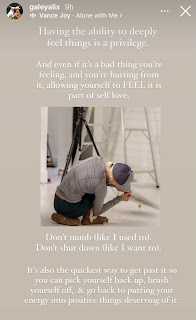 If you've been reading these posts for a while, you know that throughout the last 18 months I've worn mostly 1) athletic clothes (including my all-time favorite shorts) and 2) t-shirts with funny, clever, sarcastic, or snarky (depending on the day) sayings on them. I was getting excited about starting to wear "real" clothes again - and I actually did wear real clothes a few times throughout the summer - but now that it feels like we're back in pandemic mode, I just want to go back to that which is comfy.

One of those real outfits I wore this summer included a new Loft tank, a new pair of Loft jeans, and a new pair of heeled sandals from Walmart. I hate selfies with a passion, but a selfie (with my head cut off) was the best way to show you the three pieces of this outfit - all of which I love - so here we are. 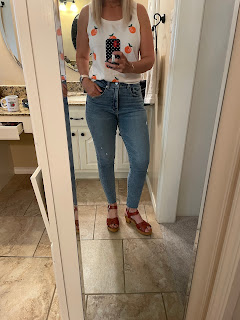 (This is actually a link to the red version of my sandals, which now I might need because they only cost $11.99. I can't find the cognac version online, but I know they still have them in the stores.)

I became a fan of Native after first "quitting" antiperspirants with aluminum a few years ago and then sampling a little travel-sized Native deodorant a couple of years after that. The kids and I all use their aluminum-free and paraben-free deodorants, and I've been happy with how well they work and their scents. So when Native came out with sunscreen - especially sunscreen that smelled like a pina colada - I had to give it a try. And the verdict? Both the face and body lotions are great. They do the job of protecting my skin, go on smoothly, absorb quickly (as in they don't make skin look ghostly white), and feel lightweight. And again, the ones I chose to try smell like a pina colada, which is delightful!

Note: the paragraph above sounds a little like an ad, but I promise it isn't. I have no affiliation with Native and I bought these products myself. I just like to share "the wealth" when I find something I like! 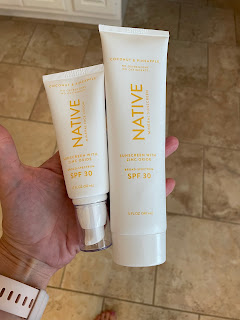 Here are just a few of my favorite stories, ranging from those that made me laugh to those that all but restored my faith in humanity, from the 202ONE Summer Olympic Games in Tokyo.

Hope you and yours had a great August!