The Porch That Quarantine Built

Despite my incessant complaining about the weather, I really do enjoy spending time outside. I'm just a little more particular than most, in that I strongly dislike temperatures above 80 degrees and I HATE all bugs. There are ways to remedy or improve these conditions, however: beaches, swimming pools, and sprinklers make the heat more tolerable, and staying on the opposite side of screens from mosquitoes makes them less annoying.
When it became apparent we'd be spending A LOT of time at home this summer, we set up an above-ground pool on part of our patio. And when it became apparent we'd be spending A LOT of time at home this fall, we started looking into turning another part of our patio into a three-season screened porch.
Funny side note: while giving me a quote, the owner of the company we chose - more on them in a moment - mentioned to me how much people in Texas enjoy their three-season porches. I laughed, and then explained to him that while yes, I planned to use the porch three seasons out of the year, it wouldn't be the same three seasons as other Texans use their porches. Summer? NO WAY. Winter? HALLELUJAH.
We opted to use Solar X of Texas, a locally-owned and -operated small business here in Bryan-College Station. The owner did all of the work himself (with a little help from his wife), and we were incredibly happy with their price, their professionalism, the amount of time the project took, the quality of their work, and the overall finished product.
I took on furnishing and decorating the space, and while I'm not great at furnishing or decorating, I love how the space turned out. I know we will spend a considerable amount of time outside on the porch each of us on our own, as a family, and with friends...and I'm excited to actually sleep out there (with an air mattress, of course) once the nighttime temperatures start dropping into the 50s!
I think the space looks the most fun at night, with the lights on, so that's why the majority of the pictures were taken around dusk. During the day, you can barely see the screens looking from the inside out, and from the outside in, they look dark to block some of the sun and heat. 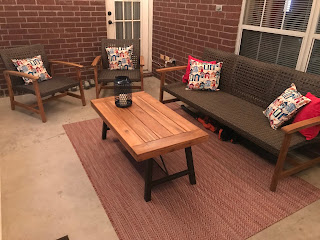 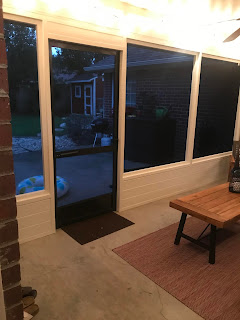 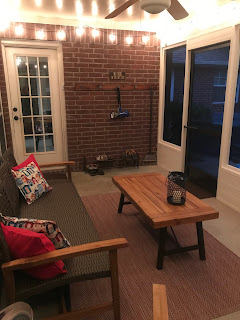 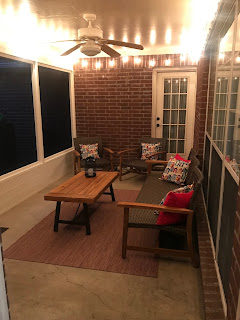 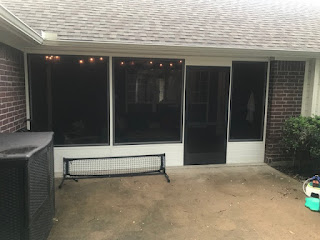 Only one detail has yet to completed...Tom needs a television on that far wall. 😉 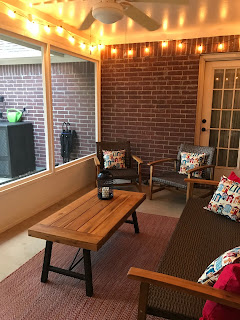 Linking to a few of the items in the photos below.
Posted by Chasing Roots at 5:00 AM