In our family, the one most looking forward to life as we once knew it is...Tux.

Given what you now know about Tux's likes and dislikes, I bet you can guess how quarantine is going.

...and taking him for rides on her scooter.


Lately he scowls at me with the same look he usually reserves for the last week of summer. I may be anthropomorphizing him, but it feels like he's begging me to save him from the smaller humans (one in particular).


Unfortunately, all that stress caught up with him a couple of weeks ago and he took it out on me as I tried to remove the many burrs he had stuck in his fur and in his skin beneath the fur. He - understandably - freaked out, and in an attempt to escape my grasp he bit me. This bite was worse than any I've ever had from a cat, so I decided to have my doc take a look at it via a virtual appointment. (Anyone else find themselves yelling "STOP DOING THAT - WE CAN'T GO TO THE ER!!!" at their children on the regular? Now is NOT the time to end up at Urgent Care or in the Emergency Room.) I ended up needing an oral antibiotic and having to call Animal Control to report the bite. And then, even though it was MY FAULT Tux bit me...and even though Tux is MY PET...and even though Tux is licensed and vaccinated and clearly does not have rabies...we had to quarantine him for 10 days or risk a citation, a fine, and "seizure of the animal".

Side note: I'm not going to go into great detail here, but I will say that after three unpleasant (and that's both putting it kindly and giving them far more credit and grace than they deserve) encounters with Animal Control in the last few months, I don't plan to rely on them for anything in the future.

In addition to wanting (needing?) the freedom to roam around outside, Tux also prefers to use the restroom outside. Forcing him to stay inside* brought about a whole new level of awful - think hours of meow-crying every day - that I can only compare to listening to a baby cry and not being able to calm them down. 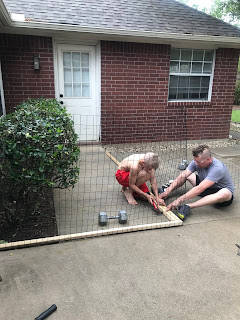 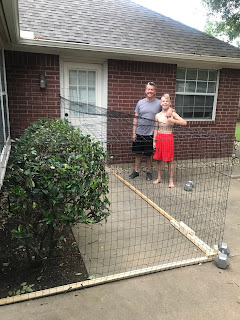 On top of the stress and emotion associated with Tux's "punishment", I dealt with quite a few emotional and scary days trying to stay on top of the budding infection in my puncture wounds.

Thankfully, the 10-day course of oral antibiotics combined with topical antibiotics seems to have done the trick and my wounds are almost healed.

Thankfully, the 10-day** quarantine eventually came to an end and Tux was able to be seen and given a clean bill of health by our veterinarian.

So there you have it - a big time episode of Tuesdays With Tux: Quarantine Edition. It's like I always never say: go big or go home.

Oh wait, we're already home. So I guess it's go big AND go home.
Posted by Chasing Roots at 5:00 AM