As a little girl, I thought - self-centeredly but understandably so - that when my mom, sister, and I ran "errands", we were actually running "Erins". One day my sister asked my mom, "why don't we ever get to run Saras?" From then on my mom made a point to periodically run Saras, rather than just Erins. (Apparently this is a common childhood misinterpretation of the word "errands" - my niece, Lily, also once asked her mom why they never got to run Lilys.)

One - or both - of these girls has dance after school every day except Friday, so on their free Fridays they want to have playdates. The challenge is that because Hallie has dance and Will has soccer on Mondays, Wednesdays, and Thursdays, we have to fit appointments in on Tuesday afternoons and errands in on Friday afternoons. (Kid appointments and errands for which the kids need to be with me, of course - I accomplish as much as possible that doesn't involve the kids while they're at school.) The solution to this challenge turned out to be Kara coming with us on our errands, because errands with a friend and someone else's mom are so much more fun than errands without a friend and with your own mom, right? So far this semester Kara has joined me and Hallie and occasionally Will on treks to Target, Wal-Mart, Once Upon a Child, Hobby Lobby, and the library.

I told the girls the story about running Saras instead of Erins, while they didn't think it was quite as funny as I did/do, we did agree that our errands would be more fun if we renamed them. I suppose there are worse ways to spend a Friday afternoon than running Hallies and Karas with these two (well, three, with that big brother in the way back) cuties. 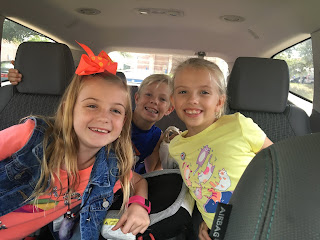