I've mentioned previously that in order to get these High Five for Friday posts up at 5am on Friday mornings, I have to finish writing them no later than about midday on Wednesday. Anything that happens from that point on gets bumped to the following week's post.

I've also mentioned previously that I try my best to share an accurate picture of our lives in here Texas; I don't post about everything, but I do post about both the good and the bad.

Last week went swimmingly until Wednesday midday. Then at about the time I hit publish on the High Five for Friday post, the week took an unfortunate turn: malfunctioning dryer, leaking sink, leaking water heater (WHY, in Texas, do they put water heaters in attics?!), Tourette's flare-up, school stress, emotional meltdown, and quite a few tough conversations and decisions. Those 48 hours between when I finished writing the High Five for Friday post and when the post actually went live were a struggle, so when I hopped on to Facebook on Friday afternoon and saw the post's likes and comments and shares, I felt guilty. Guilty that my week looked better on "paper" than it had played out in real life...guilty that I hadn't painted an honest picture.

Yes, the point of High Five for Friday posts is to focus on the good. But sometimes I have to acknowledge the bad as a reminder that the highs have value only because we also experience the lows.

In that vein, I came up with two high fives that happened during that messy stretch of 48 hours:

1. We had our water heater replaced in ONE DAY. Tom talked to the company around 10am. They called me around 11am, and arrived at my house at 12:30pm. They drained the old unit, purchased the new unit, removed the old unit, and installed the new unit...by 3:30pm, less than six hours after Tom first spoke to them on the phone. If you need a recommendation, email me at erin@chasingroots.com and I'll share the company name and phone number.

2. I played Wii for the first time in years(?) and I didn't hate it. And I beat Tom at bowling.

Now, moving on to this week:

3. On Saturday I took Will and a friend to see the Houston Dynamo - our local-est MLS (professional soccer) team - battle it out against Atlanta United. We'd been meaning to take in a game for years, but it took "Cavalry Day" at the ballpark for us to finally solidify plans to attend. 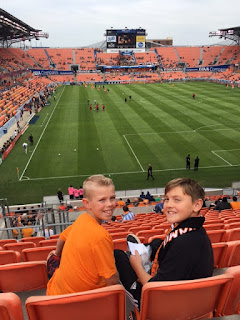 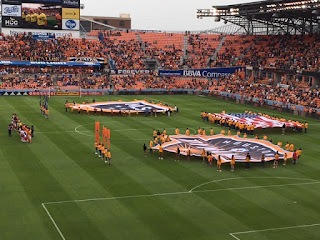 We all enjoyed watching the Dynamo play (they won convincingly), and I crossed a mini bullet point off my Texas Bucket List!

4. On Tuesday night Tom's Uncle Tom and Aunt Pam arrived from Wisconsin for a brief overnight visit. Tom's parents and my parents make the trek to visit us fairly regularly (considering the distance they must travel to get here), but we don't usually have the privilege of welcoming extended family members into our home because they all live at least a few states away. We had a fun evening catching up with Tom and Pam, and are grateful they worked us into their cross-country travels!