On Friday afternoon, as I scrolled through my Facebook feed looking for a specific article I wanted to reference for a future post, a video passed quickly from the bottom of my screen to the top. Nearly a full minute later, something made me reverse direction until the video came into focus on my screen.

I rarely watch videos on Facebook. I read the titles and occasionally add my own "like" or "wow" (dangerous, I know, given my lack of knowledge about the videos' content), but then I move on. I can't say for certain why I decided on this one - it wasn't the title, that I know for certain. Perhaps it was the fact that I had had an "Alexander"* kind of day and thought the video might lift my spirits. Perhaps it was that the speaker looked around Will's age, or that behind the young man sat an interesting collection of adults (an elderly black woman dressed in her Sunday best, a younger black woman in a suit, a middle-aged white priest, and Bernie Sanders). Whatever the case, I clicked, I watched, and two minutes later I began crying slow, dolloping tears onto my computer keyboard.

My tears rose from a complicated place. A place where churning uncertainty, anxiety, and sorrow clashed with overwhelming hope for our country's future, and from which this cacophony of emotion erupted. As I sat back and let myself work through this cacophony of emotion, I came to one conclusion: though the responsibility should not fall on their shoulders, I have faith in our children's ability - guided by young people such as the speaker in this video - to make this world a better place.

But...I have to do my part as well. I must carry the torch as far as possible, so that when their turn comes, my children will know I made every effort to make less daunting and treacherous their journey carrying that same torch.

So today, instead of what I had originally planned and as a follow up to last Monday's MLK Jr. Day post, I am sharing a link to this video. (Feel free to start at 1:30 in if you find yourself pressed for time, but then make sure you watch all the way until the end.) This act is a small one, but is hopefully a step in the right direction. 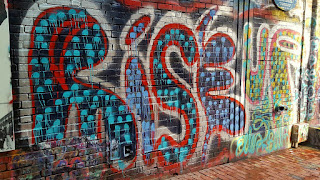 *Remember Alexander and the Terrible, Horrible, No Good, Very Bad Day? I channeled young Alexander last Friday.
Posted by Chasing Roots at 5:00 AM