Vermin Problems of Its Own

Though Texas' critters have won a convincing victory over Wisconsin's critters in the battle of who scares me the most, one of Wisconsin's "finest" - along with my clever and conniving brother-in-law - gave me quite a fright one evening late last month.

My sister had trekked out to the garage to find something, and when she returned to the house without whatever it was, I jokingly asked if she'd forgotten her original mission. As it turns out, she hadn't forgotten; instead she'd encountered a vermin blocking her way.

I walked back out to the garage with her, and then took a picture of the injured mouse - who truly was blocking the one and only path between the cars to the rear of the garage - from as far back as my phone camera's zoom lens would allow. (I wouldn't have taken a picture at all, but I felt especially compassionate that night thanks the kind and heroic mice characters in the book series Will and I were reading at the time.) 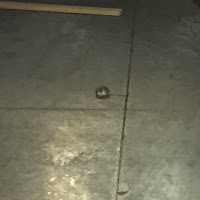 Despite my heightened compassion, I still didn't have it in me to handle - whatever that would have meant in this situation - the mouse. Instead, Sara and I called on my bro-in-law, Jeff, to tend to the mouse and he valiantly stepped up to the plate. 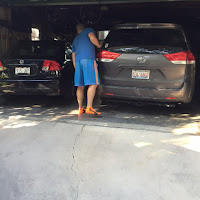 Later that evening, while upstairs helping the little kids with their baths, I heard Jeff ask Will to take my phone to me. I also heard Will agree, and then begin his ascent to the second floor. I assumed Jeff wanted Will to deliver the phone because I'd missed a call or text, so as soon as Will handed over the phone I woke it up…and found this: 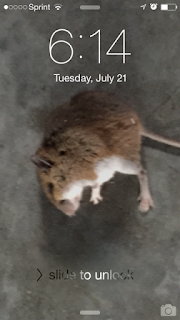 Jeff had taken a close-up picture of the mouse using my phone and then set that photo as my phone's wallpaper.

Seconds after I screamed and dropped the phone, hearty laughter erupted downstairs. I hid my own laughter behind a face of astonishment and anger, and demanded Jeff change my phone's wallpaper back to the adorably innocent picture of Will and Hallie. 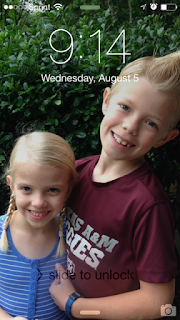 Much better.
Posted by Chasing Roots at 5:00 AM