It's Not Always Easy, But It's Usually Worth It

Monday's post about big kids prompted a flashback of sorts to my own childhood.

If I had big kids in my life, I don't remember them. But as the oldest sibling in my family, the oldest cousin on one side of my extended family, and the oldest girl in my large camping family, I remember plenty about being the big kid myself. I spent many a holiday playing with and taking care of my younger relatives.

My parents were careful not to ask too much of me as a big kid, and they made an effort to balance the time I spent in a supervisory role with time spent on my own, with them, or with friends. For example…

My sister Sara didn't grow to love roller coasters until her teenage years. Prior to reaching that level of maturity, she could only muster enough courage to ride the simplest, slowest kiddie rides. These rides couldn't hold adults, so my parents would silently eye-plead with me to accompany Sara on the kiddie ride of her choice. The reward was a ride on the tilt-a-whirl with my dad, so I always agreed…and here's what always happened:

Sara joined the back of the line enthusiastically, but as we inched closer and closer to the ride, she grew quiet. When our turn to climb into the race cars (or firetrucks or helicopters or boats) arrived, I took her hand and gently pulled dragged her into our chosen mode of faux transportation. And then, when the ride lurched forward, Sara started to cry. Seconds later her cries turned to screams.

I was far too old and big to be on the ride in the first place, and then there I was, sitting next to a SCREAMING child who was also borderline too old and big to be on the ride. As we slowly circled, I simultaneously tried to console Sara (she never cared much for my consoling though, so it did little good) and shot my mom looks that said, "I want more than a ride on the tilt-a-whirl for this. I want six rides on the tilt-a-whirl and a ride on the scrambler and an ice cream cone and the new Kokomo cassette tape for my walkman".

Between our bi-annual visits to a favorite amusement park near my grandparents' house in Green Bay, the county fair, and other festivals with rides, this scenario repeated itself no fewer than 12 times throughout my late childhood/tween years. In those moments I was mortified, but as I grew older I eventually understood how important it was to my parents that I acted the role of Sara's big kid. (I also understood that I could take 100% of the credit for the daredevil amusement park rider Sara became.)

This summer my mom, Sara, and I took our four kids to one of our favorite amusement parks in Wisconsin. When the time came to try out the kiddie rides, Hallie and Lily wanted to ride together (just the two of them), which left Carter all by himself. It took just one silent eye-plea for Will to climb aboard car after firetruck after boat with Carter. 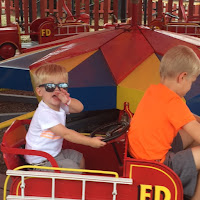 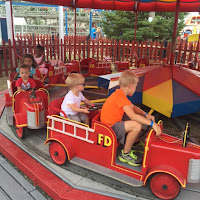 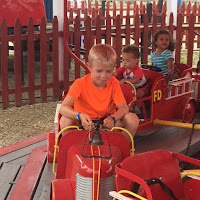 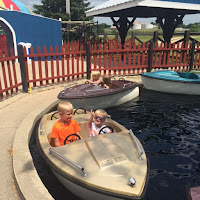 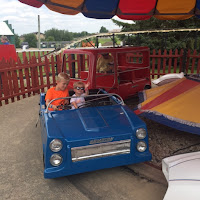 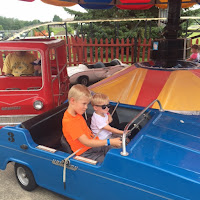 Will helped Carter buckle up, showed him how to honk the horns and ring the bells, and only complained once about how his knees kept banging against the firetruck steering wheel. I think he understood - at a much earlier age than I did - how important it was to me and Sara that he act the role of Carter's big kid.

After the kiddie rides a deserving Will rode the bumper cars, the roller coaster twice, and the tilt-a-whirl four times in a row before we went home.

And now that's enough about the big kids. Stay little, little ones.
Posted by Chasing Roots at 5:00 AM