1. Last Friday night Will graduated to a Tae Kwon Do red belt. Since his first lesson two and a half years ago, Will's goal has been to earn his black belt, and for the first time it truly feels like he might get there.

After training as a red belt for four months, Will will attempt to test out of red and graduate to red/black. Red/black is the only transitional ranking, given to students who have completed the red belt requirements and are training to test for their black belts. After four additional months of training as a red/black, Will will hopefully test for his black belt next April.

2. Both kiddos had an excellent first day of school. Hallie gave me a hug and kiss and ran to begin working at her desk, while Will allowed me to discretely hug him before he pulled away and joined his buddies in a conversation about football. They left me so quickly that I barely had time to whisper my traditional "work hard and be kind" in their ears. 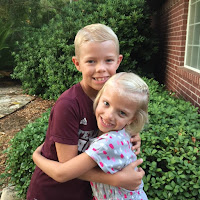 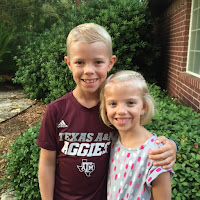 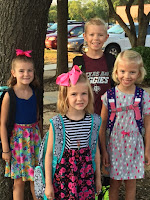 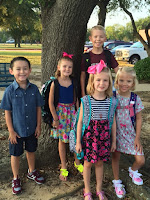 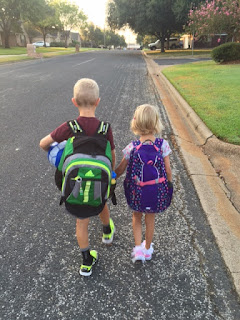 I cried all the way home for the first time ever.

3. We live in a college town, which means that a week or two before the public schools start back, 50,000 college students return in droves.

While swimming with friends last week, two young women joined us at the pool. Cell phones in hand, they climbed aboard their rafts, took a selfie or two, and set sail in the deep end of the pool. We wondered how long they'd last, given the enthusiastic games of Marco Polo, hide-and-seek, and "see how big a splash we can make jumping into the deep end" our kiddos were playing here, there, and everywhere.

The pool area offers very few places to hide, so when I thought of a clever - although slightly odd - idea, I called Will over and whispered it in his ear. He smiled and hurried off, not slowing until he reached the corner of the pool where the young women lounged on their rafts. From across the pool I saw him extend a greeting as he jumped into the water right next to them. Then, just as the "it" friend finished counting, he took a deep breath and ducked under the water…and swam down a few feet underneath their rafts.


Now you see him, now you don't. Repeat. 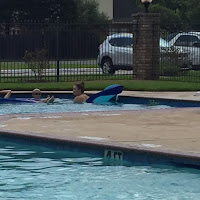 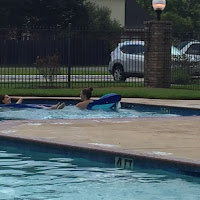 He stayed hidden beneath them until he ran out of breath, at which point he popped up, filled his lungs, and swam back down. Meanwhile Will's new friends took a few pictures - which I imagine are now on Facebook and Instagram tagged with #crazykidsthesedays - and enjoyed the attention they thought he was giving them. Little did they know that Will cared about only one thing: hiding from Kaylee and Paloma.

4. This week brought with it a smorgasbord of anxiety. I lost sleep over the kids heading back to school and have consistently felt unsettled, nervous, and nauseous about a number of commitments and decisions ahead of us. But…I made it! Conversations with friends, lots of exercise, "Unbreakable Kimmy Schmidt", one chocolate candy bar, four chocolate chip cookies, a little wine, and a handful of special moments spent with my kiddos kept "anxious" from turning into "overwhelmed". High five!