I Can't Take Them Anywhere

Sometimes it's just too much, you know?

Last week I took Will and Hallie to Chick-Fil-A for an early dinner before Will's karate lesson. Because of the early-bird-special time of day, the restaurant was nearly empty; a 20-something man dining alone and a couple in their mid-40's were the only other customers.

As I stepped up to the counter to place our order, I instructed Will and Hallie to gather napkins, utensils, and sauces and choose a table near the indoor play area (so that after we'd finished eating I could keep an eye on them while they ran off steam on the jungle gym). As they scampered off I went about the business of ordering.

When I turned around after having placed my order, I saw them. They'd followed my instructions with regard to gathering what we needed to accessorize our meal and choosing a table, but that's where the good ended and the oh-so-uncomfortable began. Out of the approximately 40 or tables in the nearly-empty restaurant, Will and Hallie had selected the booth right behind the couple (who up until that moment had been enjoying a quiet conversation over their chicken sandwiches). And in an attempt to prove to the couple that I'd never taught them any manners of any kind, Will and Hallie were doing this:

(Thank you to Tom for helping me reenact the scene by portraying the female member of the couple.) 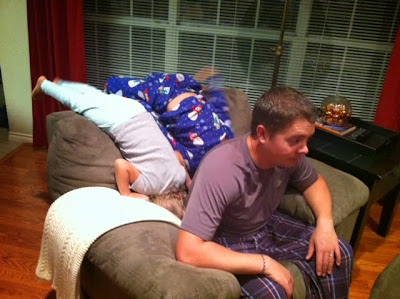 Both Will and Hallie had draped themselves over the back of the woman's seat/bench, with their heads hanging down by her butt. And while I didn't recreate this detail in the photo above, on that day Hallie's teeny tiny butt was covered only by her teeny tiny princess underwear. It was as if she planned this humiliation ahead of time, so much so that she removed her little shorts on the way to the car. (I found them, right inside the back door, when we arrived home later that evening.)

I gasped and made some sort of yelping noise that, while loud enough to startle the Chick-fil-a employees, didn't prompt Will or Hallie to even look up. Then from across the restaurant and in a voice that I hope conveyed my shock and disapproval to the innocent bystanders within earshot, I demanded that Will and Hallie remove themselves from this poor woman's personal telephone booth of space. They obliged, but did so begrudgingly.

I made my way to the table and began to apologize profusely to both members of the couple. The woman smiled at me and replied, "don't worry about it at all. I didn't even notice they were there at first, and then it took me a few seconds to realize they weren't our kids!" She nodded her head toward the play area and I followed her line of sight toward three, toe-headed kids of similar ages to mine who were wildly chasing each other up and down the slide. "We've been there," she added.

Side note: I certainly appreciated her nonchalance about the whole Will's-face-just-inches-from-her-butt circumstance, but really, who doesn't notice two kids literally crashing your dinner like that?

I'm so grateful the people Will and Hallie chose to basically harass happened to be kind, understanding parents. That doesn't mean I've ever setting foot back inside Chick-Fil-A again though.
Posted by Chasing Roots at 6:00 AM