In the early 1880's, the Military Walk on the campus of Texas A&M University was a simple dirt road on which students (who were all male and members of the Corps of Cadets at the time) assembled and then marched together to meals. Throughout the years the Military Walk was updated to a narrow paved road and then to a series of sidewalks, all running through the center of campus and past a number of significant and historical buildings and landmarks.

The Military Walk tradition continued until World War II when student enrollment decreased dramatically, and the tradition was never reinstated following the war because the primary dining hall on campus was relocated.

In 2010 TAMU completed a massive restoration - made possible by Dan A. Hughes, a 1951 graduate of TAMU and a former member of the Corps of Cadets - of the Military Walk. Now kiosks along the side of the walk provide information about campus buildings both standing and long-since demolished, and new landscaping and a wider brick and limestone paver pathway create a peaceful and pleasant avenue on which to stroll.

At the dedication of the new Military Walk, Hughes shared his sentiments with those in attendance. "As you travel along this walk, may you follow in the footsteps of those who have gone before with honor and optimism - and with the intent to pave the way for integrity, dedication to excellence and commitment to selfless service."

My family walks through campus at least once a month, and one of our favorite routes starts at Starbucks (my addition to the route) and takes us past the Fish Pond, down the Military Walk, around the Earl Rudder statue, and on to Kyle Field.

I snapped this picture of the kids and Tom on a Sunday morning in early Spring. While my children are not yet old enough to understand all the Military Walk represents, on that day they certainly embodied the optimism Hughes spoke of in his speech. 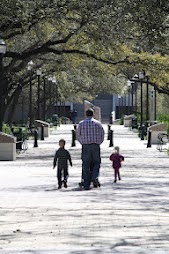