There's No Crying in Baseball

Last March we took the kids to their first TAMU men's baseball game (Will had attended both major and minor league baseball games in Michigan and Wisconsin, but the TAMU game was Hallie's first baseball game of any kind). This spring we've been back to Olson Field at Blue Bell Park - now newly renovated and arguably nicest college baseball stadium in the country - enjoying another season of TAMU men's baseball.
The games have been particularly fun this year because we've both attended with friends and run into friends once we arrived at the ballpark. Will could barely contain his excitement when we went to a game with Logan and his family, and Hallie absolutely loves running into Andrea - one of her teachers - and Andrea's daughter, McKenna, who Hallie affectionately calls "BcKenna". And all four of us are huge fans of the new playground inside the ballpark (you read that correctly, there is a playground inside the ballpark) where children can play while their parents watch both them and the game.
As we entered the ballpark for our first game of the season, someone stopped us and asked Will if he might be interested in running onto the field with one of the players as he was introduced.  He was really excited to participate, and was incredibly well-behaved throughout the 40 or so minutes he had to wait for his moment in the spotlight.
There are few placed I'd rather be on a Friday night than at a baseball game with my family, as the lights of the ballpark illuminate the expansive Texas sky. 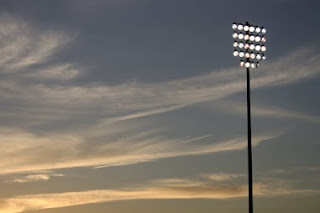 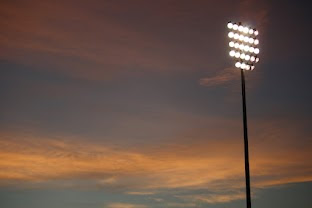