Where Has All the Water Gone?

In case you haven’t heard, a good portion of the United States – including Texas – is suffering from one of the worst droughts, if not THE worst drought, in our country’s history. Combine record-breaking temperatures for record-breaking numbers of days with record-breaking drought and you get, well, trouble. (Right here in River City! With a capital “T” that rhymes with “P”…someone stop me before Broadway show tunes take over this blog.)

The impact of this drought is far-reaching. The environment; the economy; local and regional crop production; human and animal health; and community and individual social behavior have all been, or likely soon will be, negatively affected by this deficiency in our water supply. 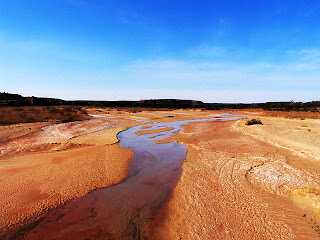 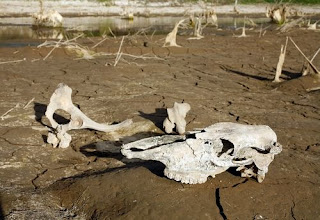 Our family is incredibly lucky to have only been moderately inconvenienced by this drought. Though we’ve cut back on our water consumption (we take quick showers and use less water in the kids’ bath, set the dishwasher and washing machine at lower water levels, and have all but stopped watering the lawn), we’ve done so voluntarily and not because we were forced to by circumstances or local government. Compared to the farmers and ranchers who depend on large quantities of water to grow their crops and take care of their animals, we have nothing to complain about.

A couple of weeks ago my brother-in-law sent me this article.

In case you breezed right on past that link, thinking that an article about the drought wouldn’t be worth reading, I’ve included below the headline and accompanying text. This is a not-to-be-missed report.

We all know that recycling is a good thing. But recycling sewage water? According to Discovery News, the drought in Texas has gotten so desperate that the town of Big Spring is considering recycling toilet water for its 27,000 residents. While it sounds unusual (and more than a little gross), it's not that uncommon. NASA, for example, has a system in which it filters urine directly to salvage water.

However, the process in Texas would work a little differently than NASA's system. "We're taking treated effluent (wastewater), normally discharged into a creek, and blending it with (traditionally supplied potable) water," Big Spring's district manager, John Grant, told Discovery. Which might not be enough to reassure the squeamish, but with less than 0.1 inches of rain in the region for months, you do what you have to do.

If it comes to this in Brazos County or College Station, I’m moving.