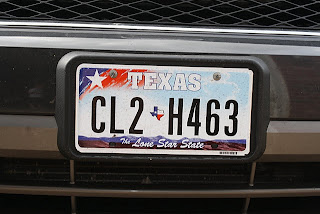 Not the case, folks, not the case. Especially in Texas.

I was so intimidated and overwhelmed by the process of becoming a Texas resident (I’d heard it could be rough) that I avoided even thinking about the more complicated steps for close to two months. But when I read online that I only had three months to knock these steps out before I’d get in trouble (with who I don’t know, but I’m kind of afraid of getting in trouble regardless), I got to work.

Next came the vehicle inspection. Huh? Texas requires all residents to have their vehicles inspected before they can be registered and titled. While I can’t tell you what the inspector was looking for, I can tell you that it couldn’t have been much since he let my four-year-old “help” and all they did was check the tires and the blinkers. The inspector promised Will a job when he turns 16 (score), but I’m pretty sure Will could do the job fairly effectively now.

And then came the County Tax Office to register and title the car. I went with Hallie while Will was in school so I’d only have to wrangle one child. When we arrived I packed up the required paperwork and documentation along with bags of snacks, a coloring book and crayons, and two new toys to keep Hallie occupied; strapped her into her stroller; and said a quick prayer for short lines, pleasant County Tax Office employees, and patience. My prayers were answered, and though the woman who assisted me was not at all nice, we were in and out in about 20 minutes. Another whew.

But then came the dreaded DMV. I checked their website FOUR times to make sure I had the correct paperwork and documents with me. I drove 30 miles to the office, again with Hallie in tow. I waited in line for 10 minutes and was “welcomed” to the DMV with a not-at-all-friendly “next in line”. And then I was informed that I wouldn’t be able to proceed without my birth certificate, a document that was NOT LISTED ON THE WEBSITE. I didn’t yell or cry, both of which I wanted to do, but instead firmly told the employee that the DMV website was incorrect and should be updated immediately. I grabbed Hallie’s hand, turned, and walked with purpose toward the door, pleased with how I’d held my ground but was not unkind. But because Hallie felt the need to ruin my composed exit, she pulled away from me, ran back and waved to the employee, and yelled “BYE BYE! SEE YOU SOON!”. That's my girl.

Two weeks later Hallie and I were back in line at the DMV. We waited for 15 minutes, had our paperwork verified by a different employee (thank goodness), and were given a number. 55 minutes, three snacks, twice through all the photos on my phone, and six repeats of the local weather loop on The Weather Channel later we were called to one of the five counters. And can you guess who was working at our counter? That’s right, the employee to whom I made my firm comments two weeks earlier. Karma’s a b&*$#, isn’t it? I repeated “kill her with kindness, Erin” over and over again in my head and tried to follow my own instructions. And you know what? It worked. Sort of. Well, it would have worked if Hallie had been on board. Turns out all waiting and no play at the DMV turns Hallie into a little rascal. While I was signing paperwork, getting my eyes checked, taking my new picture, and paying for my license, Hallie ran away and hid from me twice (“I’m SO sorry – I’ll be right back”, I said as I ran after her), shouted her ABC’s countless times (Hallie’s grandmas think this is cute, but it was made clear to me that such behavior is not cute at the DMV), demanded an additional snack and then smeared her gummies all over the floor and my shoes, and pooped her pants. And that's my girl too.

So after all that, I’m finally and officially a Texas resident. Funny thing though, Tom isn’t (I think he's afraid to go to the DMV after hearing what Hallie and I experienced), and we’ve been here for four months. Don’t tell anyone though, because I’d hate for him to get in trouble.
Posted by Chasing Roots at 2:35 PM